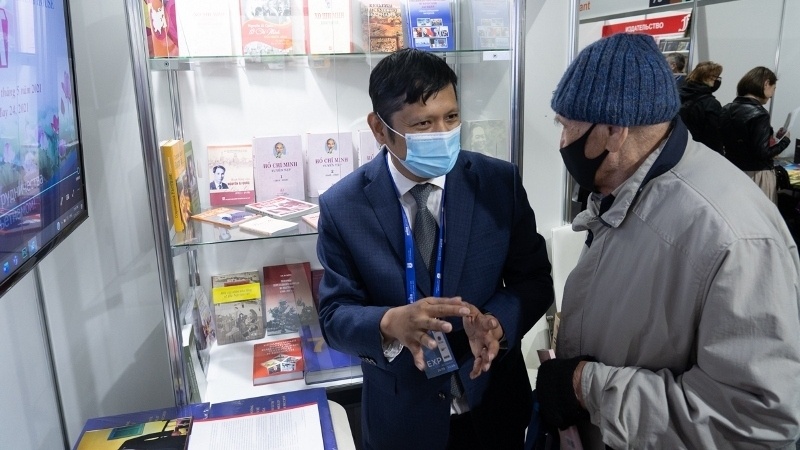 The opening ceremony saw the attendance of Chairman of the Federation Council Valentina Matviyenko and Governor of Saint Petersburg City Alexander Beglov.

Taking place across four days, the fair is an outstanding cultural event in Russia’s “northern capital with many activities promoting books from leading publishing houses and featuring the participation of various famous writers and speakers.

This year, Vietnam’s pavilion attracted a large number of Russian readers, including the Governor of Saint Petersburg, Special Representative of the Russian President on international cooperation on culture Mikhail Shvydkov and President of the Russian Book Union Sergei Stepashin.

Especially, the Su That (Truth) National Political Publishing House introduced readers to the Russian version of the book “Activities of Nguyen Ai Quoc in the Soviet Union (1923-1938)” that was translated and published on the occasion of the 131st birthday anniversary of President Ho Chi Minh and in celebration of 110 years since Uncle Ho left the country to find a way to save the nation.

The book vividly and systematically reflects the activities of Nguyen Ai Quoc (another name of President Ho Chi Minh) during the time he lived in the Soviet Union as well as the valuable support and goodwill of the Soviet Government and people for Vietnamese people’s struggle for national independence.

On the occasion, Vice Chairman of the Vietnamese Association in Russia Nguyen Quoc Hung presented the book titled “The Russians write about President Ho Chi Minh” to the Governor of St.Petersburg.

This is a collection of 17 memoirs by well-known Russian generals, revolutionary activists and social activists who worked, met and interviewed President Ho Chi Minh.

Administrator - 25 October, 2020 0
NDO - There is a generation of very young independent filmmakers who are silently making films, participating in leading prestigious cinematic festivals around the world and earning important awards.

Administrator - 22 March, 2022 0
NDO - The artist Phan Ke An's unpublished paintings of various genres and materials, will be introduced to the public for the first time, at an exhibition called "Phan Ke An - Kho Tang An Giau", at the French Cultural Institute in Hanoi.