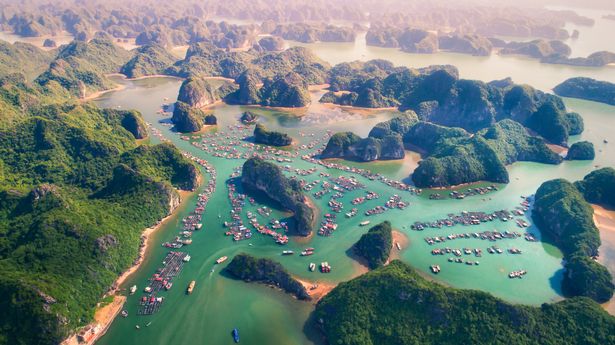 After two months of traveling around Southeast Asia, a land of more than 40 UNESCO World Heritage Sites, Kastalia Medrano, the author of an article published on Thrillist, admits that she cannot avoid the feeling of FOMO (fear of missing out) because there are so many famous and impressive destinations.

However, according to Medrano, if each country can only choose one outstanding destination, the list below is a suggestion not to be missed. If such as Kelimutu National Park (Indonesia), Kampong Ayer floating city (Brunei), Kuang Si waterfall (Laos), Tun Sakaran Marine Park (Malaysia), Banaue rice terraces (Philippines), Atauro island (East Timor), Gardens by the Bay (Singapore), Angkor Wat (Cambodia), the ancient capital of Bagan (Myanmar) and Chiang Mai (Thailand) are places suggested by Medrano in other countries, in Vietnam, Lan Ha Bay is named destination.

Lan Ha Bay is praised by many international writers as an impressive tourist destination of Vietnam. Photo: The Travel

“The floating village on Cat Ba island has about 200 houses with a history of thousands of years. The bay owns hundreds of islands, of which Cat Ba is the largest. Visitors can rent a boat to explore or spend the day swimming here. There are more than 100 hotels in the vicinity for tourists who want to stay here longer,” she wrote.

At the end of May 2020, Vietnam’s Lan Ha Bay was especially noticed by domestic and international media after this bay appeared on the Instagram of famous actor Leonardo DiCaprio.

The Hollywood actor couldn’t hold back from this beautiful bay of Vietnam, he said “this place is like a paradise”. Accompanying the sharing, Leonardo DiCaprio called on everyone to join hands to preserve the environment here.