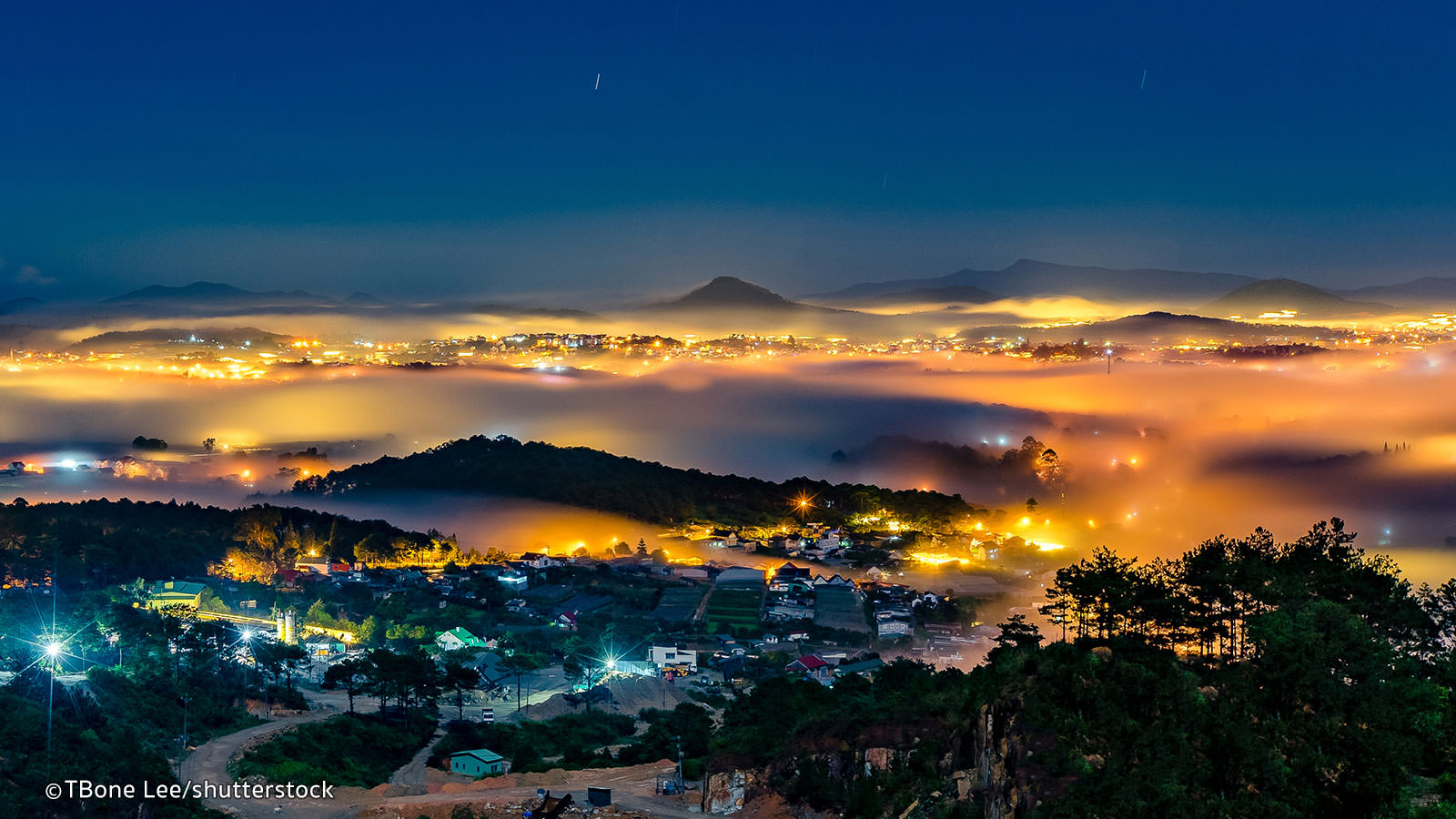 100 Roofs is located in an unusual place for such a popular café and it also has quite an amazing design. Situated amongst small shop-houses and just about 100 metres from the town market, regulars usually go to the rooftop where they can appreciate the views. A must try for all new comers is the locally brewed beer.

Café de la Poste lies across the road from Dalat’s main post office and is adjacent to (and owned by) the Sofitel. If you want to try out fairly expensive French cuisine without breaking the bank, this is the place to go. The building and its setup are very typical French, meaning it is charming and has a lovely ambience with a good selection of French wine. Café de la Poste is popular for its breakfast and lunch set menus. If you happen to be in Dalat on a Sunday, check out its famous Sunday brunch.

Da Lat Night Market offers what seems like an endless number of food stalls, which spill into the streets around Nguyen Thi Minh Khai. Offering many local favourites at affordable prices, some of the most popular ones include traditional rice noodles, banh mi, Vietnamese pizza (grilled rice paper with a variety of topping), and finish it

This legendary bar is part of the vintage Hotel Dalat Palace Hotel and was named after Larry Hillblom, the American billionaire businessman who was a key person in turning Dalat into the up-market resort that it is. Hillblom is also known as a co-founder of DHL Worldwide Express. The cosy bar features pool tables, games, widescreen TVs and private corners, with a menu covering western pub food including pizza, burgers and more.

A smaller setup, Le Rabelais is located on the lobby floor of Dalat Palace Hotel. It has a maximum capacity of 20pax allowing customers intimacy with comfortable seating and a fireplace. Sometimes there is live music with a violinist and pianist.

Saigon Nite is a friendly and cosy little bar located downtown and has been around longer than many of its competitors. It has pool tables, games, and serves inexpensive drinks and cocktails.

The Escape Bar Da Lat is one of the best places to enjoy fancy cocktails and live music during your stay in Da Lat. From country and blues, to rock & roll and reggae, this 1970s-style bar is located at the basement of Muong Thanh Dalat Hotel, about a five-minute walk from Xuan Hong Lake.

It is true that live music is very limited in Dalat but what V Café has to offer is just right for this small resort town. This popular all-day dining café is run by an American-Vietnamese couple. Their regular live music makes them a popular hangout for many expats and quite a few visitors. The kitchen offers homemade Vietnamese dishes and good choices of Western food such as steaks, pizza, burgers, roast pork, tacos, soups and lemon meringue. Vegetarian dishes are also available. V Café has free WiFi as well as a pool table.

Administrator - 20 March, 2020 0
Nightlife in Mui Ne and Phan Thiet is fairly compact, comprising hotel bars, late-night restaurants, and hippy lounges set along Mui Ne Beach. Exuding a more relaxed ambience, these establishment feature charming interiors, friendly service, and not forgetting lots of booze and food at affordable prices – a perfect combination for a fun night out with locals and fellow travellers. Most of Phan Thiet and Mui Ne’s most popular nightlife spots are also great for catching vibrant parties, cultural nights, movie screenings, bonfires, dance performances, and guest DJs from all across Vietnam and Europe. Read on to discover the best bars and pubs in Phan Thiet and Mui Ne.

Administrator - 20 March, 2020 0
Vung Tau is a lot more commercialized compared to the Con Dao Islands and there's a lot more to do in the mainland town. This is partly because this area was used as a rest & recreation destination for American soldiers during the Vietnam War. Later on when Vung Tau became the centre of the oil business in the country, many Russians came to work in the oil fields and started a large resident compound here. Many of them socialised downtown and revitalised the place. If your idea of a good night out is a game of pool and chatting with girls who work as hostesses in some of the more ‘colourful’ cafes and bars, Vung Tau is the place to be. Con Dao is beautiful and very quiet at night. Nightlife activity here is still very limited. It can be quite simple – eating out at one of the local restaurants, followed by drinking Vietnamese coffee or tea or beer probably at the same venue.