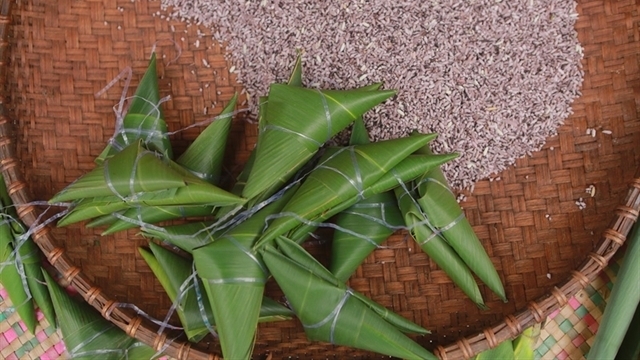 Legend has it that long ago, there was a young Ta Oi man named Ta-tui who was very intelligent and strong. At the time, local people did not know how to cultivate nor raise livestock, so they had a very hard life. Ta-tui learned ways of growing rice and raising buffaloes from other villages and came back to help the villagers.

The villagers escaped from hunger and some even became rich. Ta-tui also helped locals to build the village’s communal house, so they could gather to exchange views on village issues.

When Ta-tui died, God turned him into a very strong buffalo – very useful for the locals. To keep his image, respect and remember him, the Ta Oi people make ‘a quat’ cake, the two ends of which look like buffalo horns, to celebrate significant events such as Tet or a new rice crop.

The ingredients to make the cake include black glutinous rice (locally known as ‘nep than’) which has a gentle fragrance and sweet soft flavour.

The cake is wrapped in fresh forest leaves known as ‘la dot’ (thysanolaena latifolia), which should not be too old nor too young, otherwise, they might tear. The cake has two points representing buffalo horns.

After being wrapped up, the cakes are tied in couples; the larger cake represents a man and the smaller a girl. The cakes are soaked in water for two hours before being boiled, to ensure that they are soft.

The boiled cake has a pinkish-black colour. Nowadays the cake is not only made for big holidays such as anniversaries, Tet or wedding parties but also for dear guests visiting the A Luoi Mountains.