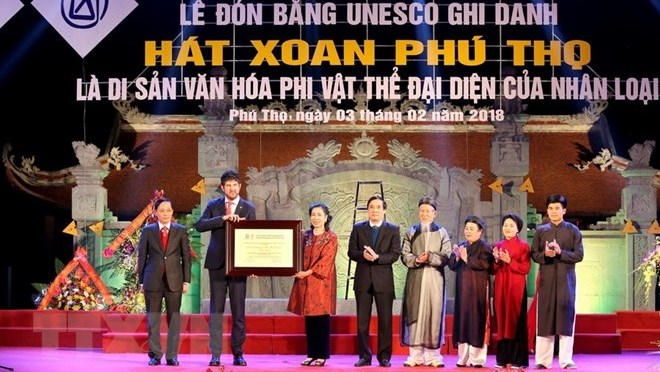 The Deputy PM made the remarks while addressing a ceremony at Lai Len temple in Viet Tri city, Phu Tho province on January 3 which was held by the provincial People’s Committee to receive a certificate officially recognising Xoan singing as an intangible cultural heritage of humanity from UNESCO.

He said that the title bestowed by UNESCO reflects an acknowledgement on behalf of the international community of the efforts made by the provincial Party committee and people in preserving their treasured cultural heritage.

He spoke of his great appreciation for Xoan singing clubs, organisations, and individuals who have made significant contributions to safeguarding and promoting the continued value of the heritage to the community.

At the ceremony, Phu Tho provincial authorities announced an action plan for safeguarding and upholding the viability of Xoan singing for the 2018-2023 period.

Xoan singing was inscribed on the UNESCO List of Intangible Cultural Heritage in Need of Urgent Safeguarding in 2011 due to the declining appreciation for this tradition, most notably among the younger generations.

The performing art was transferred to the Representative List of the Intangible Cultural Heritage of Humanity in December 2017 in recognition of the efforts made by local communities and the national authorities.

Administrator - 17 January, 2021 0
Bun mam, or a noodle soup cooked with fermented fish, boasts one of the Mekong Delta’s specialties. It seems to have originated from Cambodia. Yet it has put on many new Vietnamese features.

Administrator - 18 March, 2020 0
NDO/VNA – Vestiges of Oc Eo culture in Ba The mountain in An Giang and Nen Chua in Kien Giang in the country’s southern region were put forward to seek UNESCO recognition as world cultural heritages, heard a workshop in Hanoi on April 25.

Administrator - 18 March, 2020 0
NDO - A project was launched to digitalise the data from Emperor Tu Duc Tomb and An Dinh Palace in the central province of Thua Thien Hue, on July 1, in order to enhance the management and preservation of the two historical monuments.