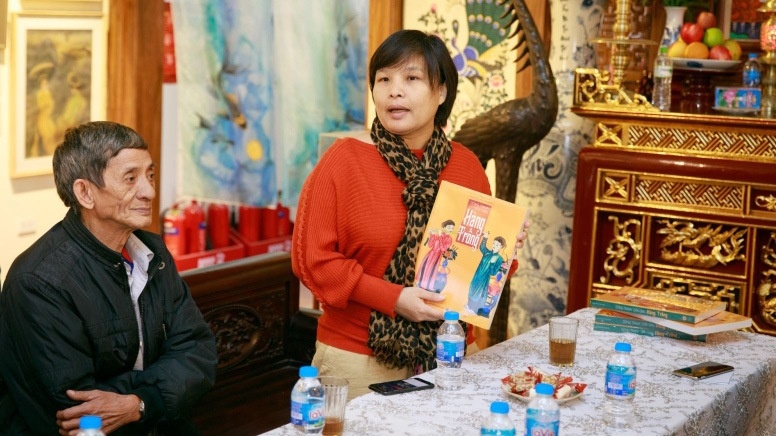 A ceremony to introduce the book to readers was held in Hanoi on December 8 by Hanoi Old Quarter’s organising board and the Hanoi Ceramics Museum.

The 340-page coloured publication is the outcome of the thorough research of Hoa, who is Director of the Hanoi Ceramics Museum, on Hang Trong folk paintings – one of the typical folk painting genres in Vietnam.

The book includes five chapters exploring the history, the artistic value, the painting techniques, the classification, and the vitality of Hang Trong folk painting.

Hoa’s research has received much support from artisan Le Dinh Nghien and his son Le Hoan, members of the only families that is still practicing the art of Hang Trong folk painting.

According to artisan Le Dinh Nghien, although a number of publications on Hang Trong folk painting have been published, Hoa’s book provides the fullest and most detailed coverage of the genre of the painting.

Through the book, Hoa wanted to establish a bride linking Hang Trong folk painting with the contemporary life while inspiring the love for traditional culture among young generation.

Hang Trong folk painting first came into being in the 16th century. The genre peaked in the late 19th century and early 20th century.

It used to be widely practiced on the streets of Hang Trong and Hang Non in Hanoi, with two popular types for worshipping and traditional Lunar New Year decoration.

Some distinguished features of Hang Trong paintings are their thin and graceful sketches as well as their richness in colour. The commonly used colours are pink, green, orange, and yellow.

This genre has been appreciated by researchers as highly aesthetic and sophisticated with the wood block printing and colouring techniques.

Cover the of book

As Vietnam enters second year of pandemic, local tourism professionals look to other industries for a pay check

Administrator - 18 March, 2020 0
NDO – Hanoi has had an additional four relics recognised as national architectural relics, according to the Ministry of Culture, Sports and Tourism (MCST).

Administrator - 10 December, 2020 0
The Hanoitimes - Co Loa Citadel is the oldest building in Vietnam with the most large-scale structure and the long historic stories.