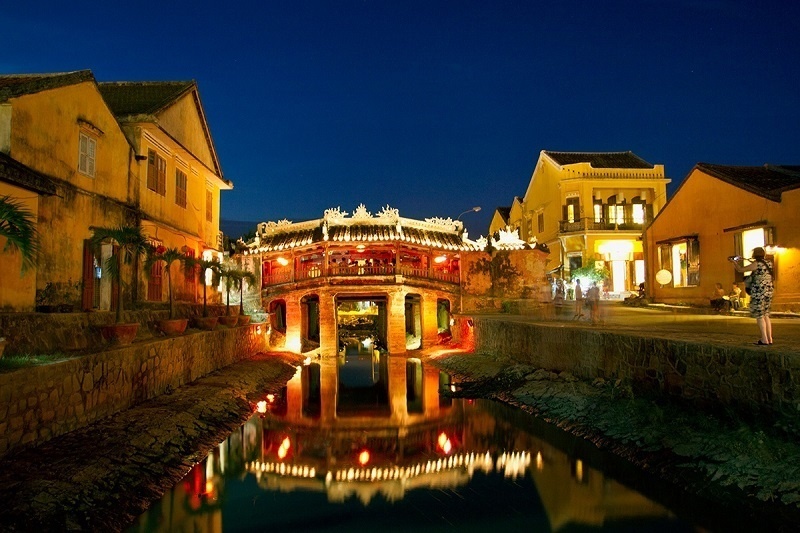 The national flag carrier Vietnam Airlines today (July 17) reopened its flights connecting Hanoi and Tokyo, marking its rebound in the global aviation market amid the Covid-19 outbreak and contributing to promoting tourism service between Vietnam and Japan.

The news has made Misato Nakamura, a Tokyo resident, feel pleasantly excited as it is a great chance for her to return to Hoi An – her beloved travel destination in the country.

“Like a toddler waiting to receive the ‘thousand-year-old candies’ on the occasion of the Shichi-go-san [a Japanese festival for kids held annually in November],” Misato told The Hanoi Times.

Misato recalled one evening in March 2020, she had leisurely strolled on the famous bridge in Hoi An ancient town – the Japanese Pagoda Bridge. The bridge was named by locals for the way it was created. It was built in Japanese architecture by the Japanese merchants who used to live here about four centuries ago.

She said she had had a busy day sightseeing in the town, shopping for leather items, having an ao dai tailor-made within 24 hours, and attending lantern crafting.

Hoi An ancient town, a world heritage site in Vietnam, is one of the hallmarks of Japanese culture, which was introduced to Vietnam in the 16th century, marking a milestone for the development of a bilateral relationship between the two countries.

According to Japanese tour operators, among Japanese tourists who visited Vietnam, 60-70% of them came to Hoi An ancient town at least once. Many destinations in Vietnam’s central region are generally favored by Japanese tourists for their beautiful beaches, world heritage sites, and extraordinary landscapes.

Before the Covid-19 pandemic, the number of tourists from Japan to Vietnam grew steadily. In 2019, the number amounted to around 952,000 people, an increase of 15% comparing to the previous year.

Despite having many tourism advantages such as a rich culture, beautiful landscapes, and many tangible and intangible heritages of the world, Vietnam is not the first choice for a number of Japanese travelers when visiting ASEAN, according to tourism experts.

He gave evidence that compared to Thailand, Vietnam is far behind in terms of tourism promotion. The Tourism Authority of Thailand has 17 representative offices in 14 countries worldwide, three of which are placed in Japan holding hundreds of tourism promotion events and campaigns each year to lure Japanese tourists.

The experts at the conference agreed that Vietnam needs to train more human resources, display more hospitality and professionalism when providing tourism services. It is mandatory to have stronger coordination between tourism and the aviation industry to promote Vietnam’s tourism in Japan.

Pham Ha, CEO of Lux Group told The Hanoi Times that Vietnam needs to focus on tourism service’s quality rather than quantity when serving the Japanese.

“Tour guides should speak Japanese and tourism products need to be more novel and creative to satisfy Japanese tourists, which may lead to them having more meaningful experiences and spend more money when traveling to Vietnam,” Ha said.

According to the latest survey on the Japanese tourism market conducted by the ASEAN Japan Centre this year, only 8.9% of the 10,000 Japanese who took part in the survey used to visit Vietnam. The country ranked fifth after Singapore, Thailand, Malaysia, and Indonesia among ten ASEAN countries.

In terms of travel companions, most of the Japanese visitors traveled to Vietnam together with “Spouse/partner” (30.5%) while 27.5% came with “Friends and acquaintances”, the rest visited Vietnam either “Alone,” with “Family and relatives,” or “Company colleagues and stakeholders.”

Roughly 20.3% of the respondents said they chose Vietnam as a destination after being recommended by family, friends, or acquaintances, a smaller percentage were attracted by the low living cost (20.3%) or were motivated by online blogs and review sites (18.1%).

According to the survey, Japanese visitors are most satisfied with the cuisine, scenery, atmosphere, and places of interest/historical sites when visiting Vietnam. Most of the Japanese visitors were impressed by “Delicious food” (28.4%) followed by “Rich in history and culture” (26.2%).

In terms of things that make Japanese travelers disappoint the most when traveling to Vietnam, “Public security” ranked first with a percentage of 11.8%, followed by “Experience and activities” (9.1%) and “Access” (8.8%).

The data presented by the survey also indicates a significant preference toward Hoi An as a tourist destination compared to other provinces, since more than 40% of the respondents favor the ancient town above other cities.

Based on this survey, new policies would be mapped out to better catering to the needs of Japanese travelers.

Japan is the third-largest source market for Vietnamese tourism, after China and South Korea.

In recent years, the Vietnam National Administration of Tourism has been taking measures to draw Japanese travelers to Vietnam, especially through visa facilitation with an exemption for people staying less than 14 days.

“The world tourism industry will change drastically after Covid-19. The behavior and habits of tourists in general and Japanese tourists, in particular, will change,” Ha told The Hanoi Times.

According to Ha, Japanese tourists tend to look for quieter and more beautiful places with hygienic and healthy food after Covid-19. In addition, with more direct flight routes opened and improved trading between Japan and Vietnam, the country will have a competitive advantage in attracting Japanese tourists over other countries in the region.

He believes that Vietnam tourism will definitely make a greater performance and attract more Japanese tourists in the near future.