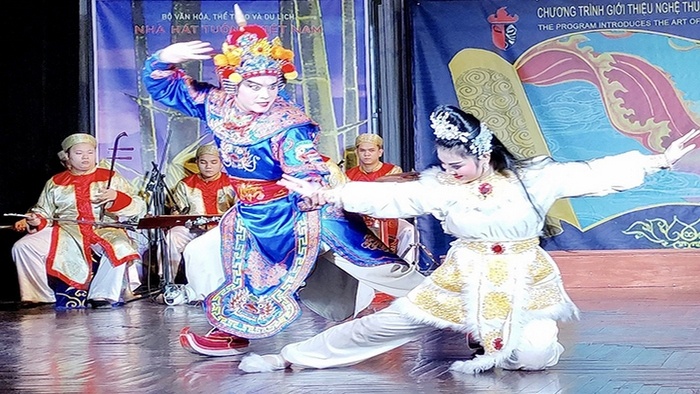 In order to open up the opportunity to bring Tuong closer to the modern public, Vietnam Tuong Theatre has developed a special programme to introduce Tuong to young audiences.

At a report of programme to leaders of the Ministry of Culture, Sports and Tourism, the artists from Vietnam Tuong Theatre performed several unique excerpts including “Ong gia cong vo tre di xem hoi” (Old man carrying his young wife on his back to a festival), “Ho Nguyet Co hoa cao” (Ho Nguyet Co turning into a fox), “Tran Quoc Toan ra quan” (Tran Quoc Toan goes to the front), and “On Dinh chem Ta” (On Dinh beheaded Ta). They are among the plays have been prepared thoroughly for their introduction at schools, aiming to inspire the love for Tuong art form among younger generations. Especially, under the programme, in addition to performances, various attractive activities have been held to introduce the traditional art form through the system of quotes and comments, notably the exchange between the artists and audiences. The viewers can enjoy the art, are directly invited to the stage to familiarise themselves with the instruments, and perform some movements with the artists as well as present their questions or concerns to learn more about the special features and basic principles in performing, dancing, makeup and music of Tuong.

Deputy Director of Vietnam Tuong Theatre, Ta Van Sop, who directly built the programme, said there have been a number of traditional art units developing models to bring stage arts to schools in order to attract a younger audience. However, they have only focused on performances or the opening of short-term training courses. Therefore, they have not been specialised and remain unsustainable.

Understanding that it is very important to arouse the interest and aspiration of learning about Tuong traditional art form among younger audiences, the theatre decided to develop the programme in a close and independent manner. Certainly, the implementation of the programme must be flexible and suitable with the time, space and requirements of each training institution, ensuring the time spent for interactive activities is at least equivalent to the time for performances.

Tuong has a strength of exploiting historical topics, so it is very suitable for schools. Having access to historical events and characters through Tuong excerpts is an effective way to help students absorb historical knowledge naturally and excitedly. Thanks to that, they can raise questions related to Tuong such as why the characters’ faces are painted with different colours and textures; and why artists have to turn around before performing. When their questions are answered accurately, the students will understand and gradually fall in love with Tuong.

During the period of building the programme from 2019 to late 2020, Vietnam Tuong Theatre was determined to provide the knowledge the audience needed. Therefore, from the very beginning, the theatre designed the contents towards the audiences in different educational levels, ensuring that the information is conveyed in the most intimate, understandable and attractive manner. During this process, the developers had to review the entire historical and literary programme from grade 1 to 12 towards seeking the historical characters and issues that can be reflected by Tuong. In addition, they systematised the theatre’s plays to find those which are suitable for students of different grade levels. For example, they chose the excerpt “Tran Quoc Toan goes to front” and others about Saint Giong and Thach Sanh for students at primary schools; meanwhile, the plays such as “Trung Nu Vuong”, “Ho Nguyet Co hoa cao”, “On Dinh chem Ta” and “Thieu phu Nam Xuong” (Nam Xuong widow), along with plays about national heroes, are suitable for students at secondary and high school levels. The most unique plays would be introduced to universities and colleges.

The artists have put all their efforts into practicing from 2020 up until now. Each performance has been rehearsed with four different crews to ensure the continuity of the programme and the ability to perform in multiple venues at the same time. In addition, the artists had to train in the skills of exchange and update basic knowledge about Tuong to provide audiences with accurate and consistent information. The programme prioritised choosing young artists because they are promising faces in this traditional art form and can easily exchange with younger audiences. This is also an opportunity for them to promote themselves and attract audiences who love and are attached to their artistic career. The theatre will create a special fan page for the programme, aiming to bring several impressive excerpts and exchanges to digital environments in order to enhance the interaction and connection between audiences and the Tuong art form in the near future.

The programme’s organisers expressed their hope that the cultural and educational sectors will “shake hands” with each other to help Tuong reach the young public at training institutions easily. The scientific and methodical formation of future audiences is the most effective and sustainable way to preserve and promote the values of the Tuong art form in particular and traditional stage in general.

Administrator - 4 March, 2021 0
Police operating in Tay Ho district of Hanoi are searching for a group of Vietnamese suspects who are accused of targeting foreign women in the area.

Administrator - 21 December, 2020 0
NDO – Chu Van An was a great teacher, renowned for his profound knowledge and upright and lofty personality.