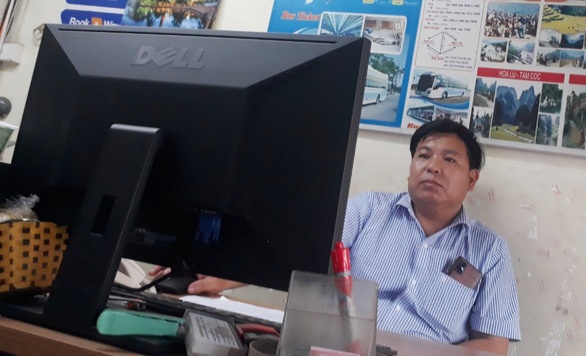 The ongoing COVID-19 pandemic has forced Nguyen Van Hien, CEO of Nu Hoang Travel Agency in Hanoi, has closed all but one of his agency’s offices.

There, he sits at his desk tracking the few orders that have come in since the fourth wave of the pandemic hit Vietnam in early April.

According to Hoang, COVID-19 is the worst thing to hit the industry in his two decades as a tourism professional, even compared to the SARS pandemic in 2003.

Before the COVID-19, Hien’s office along the Red River was consistently filled with a slew of domestic and international tourists.

Now, instead of helping people travel across the country, Hien and his three remaining employees help move packages across Vietnam.

“We assumed we would have to pause business for six months at the longest, but waiting out the pandemic for over a year has been unbearable. There’s no end in sight. Many other agencies have gone bankrupt. Our business is just a fraction of what it was,” said Hien.

Prior to the pandemic, Hien’s company sold full-packages tours from its ten offices in Hanoi. It also operated 30 buses and held stakes in restaurant chains, hotels, and cruises.

Now, its workforce has been reduced to just 10 employees and its bus fleet has been cut to five vehicles used primarily to ship goods in order to cover the rental fee for Nu Hoang Travel Agency’s last remaining office.

Most of Hieu’s ex-employees have tried to reinvent themselves in new industries.

“They work in education, insurance, real estate, e-commerce – all kinds of jobs that require a different kind of expertise,” he said.

Chu Thanh Tuyen, director of another travel agency in Hanoi, spends a great deal of his time teaching his employees how to make a living in the real estate market.

Tuyen’s firm, which used to operate ten offices in the city’s Old Quarter, has narrowed down its fleet of ten busses and vans to just two busses.

It has also shuttered doors on nine of its locations.

His staff members who have decided to stay with the company have been forced to sell real estate on the side.

“I have some past experience in real estate. Fortunately, I’m able to use that experience to help me and my workers earn income during this difficult time. But it’s not a job for everyone,” said Tuyen.

According to Tuyen, his online real estate classes attract dozens of students, but all have a strong desire to return to tourism as soon as possible.

“I entered the industry when I was still in university. I’ve been doing this for ten years now. I can’t just give up on this career,” he said.

Nguyen Van Sang, the director of another travel agency in Hanoi’s Old Quarter, said the pandemic has forced him to close all seven of his company’s offices and switch to e-commerce and driving for Grab in order to make a living.

“The pandemic took everything from me. I’ve had to start all over, finding a new job and learning how to do it, just like I did ten years ago. The only difference is that now I have a wife and children to care for and a house to pay off,” said Sang.

At the peak of his business, Sang was able to bring his relatives from Thanh Hoa Province to Hanoi and offer them jobs. Some were even able to establish their own agencies.

But in the end, COVID-19 shut the lights on their businesses and forced many of them back home.

He also works as a Grab driver and takes advantage of his time with his fares to advertise his Facebook business.

“These jobs are new to me and the only way I can learn is by doing them. I can’t just sit around and do nothing,” said Sang.

Travel agency owners from across the country seem to share similar sentiments about the pandemic.

“We were forced to sell everything, even our stationary. It was morose to see the company’s sign board lowered,” said Nguyen Van Nam, the former director of a tourism company in Hanoi.

According to Nam, the exodus of workers from the industry has put it in a position where the idea of recovery seems like a distant dream.

Domestic and international supply chains have broken, company owners have shut their doors and lost deposits of up to a year, and hotels, automobiles, and boats have begun to degrade due to a lack of use.

“A few boats that we bought using loans have been docked for months because the interior is too expensive to use for anything besides serving tourists,” explained Nam, adding that he’s working with banks to request an extension on loan repayment periods.

“That’s not much we can do with the current defferal policy of just six months. We’re entering the second year of the pandemic and tourism is still frozen. We spend each day hoping for it to end,” he said.

But it’s not all gloom and doom from tourism business owners who have taken heavy losses over the last year. Many have used the time to rethink the way they think, live, and invest.

“It helps me to live mindfully. For any goal I set, I prioritize the impacts on the environment and on other humans,” said Sang.

“We have destroyed our eco-system to the extent that it may never recover. Now, I run a business focusing on organic agricultural products and support the livelihoods of others, including coffee markers,” he added.

Regarding his tourism business, Sang said he’s switched from focusing on quantity to quality.

The tours he consults on are focused on the specific needs of his customers. He also uses his free time to focus more on his family.

Administrator - 24 July, 2021 0
Many travel businesses are looking forward to the introduction of Vietnam’s safe tourism map to “live in peace” with the COVID-19 pandemic.

Vietnamese scientist escapes from academia to help farmers in hometown

Administrator - 13 May, 2021 0
An agronomist turned down an offer to teach at his alma mater and returned to his hometown in rural Vietnam, where he now puts his knowledge to good use by helping local farmers turn their lives around.

Administrator - 21 October, 2020 0
Many young people are leaving cities for the countryside, allured by pastoral life and tired out by the rat race.