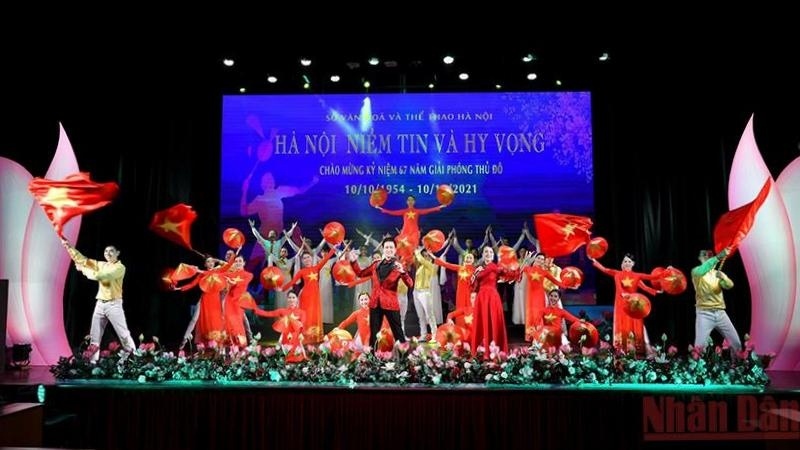 The songs performed all feature characteristics of Hanoi with the fragrance of hoa sua (milk flowers) in autumn, the blue sky, or the magical city when night falls. The performances also show the belief in the development and prosperity of Hanoi in the new period.

The art programme was performed by the artists from the Hanoi-based Thang Long Song, Music and Dance Theatre. To implement tasks in the prevention and control of the COVID-19 pandemic, the show was performed without an audience and was broadcast live on H1 Channel of Hanoi Radio Television.

On the same day, Hanoi theatres such as Thang Long Water Puppet Theatre, Hanoi Cai Luong Theatre, and Hanoi Cheo Theatre also had their own art shows to celebrate the 67th anniversary of Capital Liberation Day. Programmes performed in space without an audience were broadcast on the website, YouTube channel and fanpage and replayed on television channels to serve the public in the capital and the whole country.

The programmes have recreated the heroic years, from the historic Dien Bien Phu victory, until the victorious army returned to liberate the capital and show a strong Hanoi rising up in the integration period.

The programmes also have many musical pieces and dances showing the beauty of Hanoi’s people and landscapes, and the pride of the capital’s people towards the city.