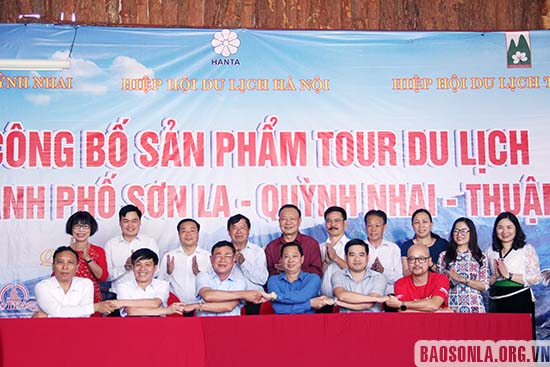 The Hanoi Tourism Association in cooperation with the its peer from the northern mountain province of Son La launched a new tourism product connecting Hanoi and Son La on April 20.

Accordingly, at the end of December 2020, the two associations conducted survey trips for tourist routes and destinations in Son La province to develop tour packages based on the strengths of local culture and ecology.

Son La is one of the attractive destinations in Northwest Vietnam. Besides well-known spots such as Moc Chau, Ta Xua, Bac Yen, there are destinations to discover.

Among them, Quynh Nhai Lake where is considered as “Ha Long Bay” of Northwest, is drawing the interest of many local enterprises to exploit and build new products.

Speaking at the launching ceremony, Mr. Hoang Chi Thuc, Chairman of Son La Tourism Association said in order to maintain and develop the tour in a long term, it was necessary to strengthen the cooperation among enterprises in the destinations to improve service quality, develop more products and services with the cultural identity of each locality, and invest in human resource training to form a team of tour guides and other tourist staff.

He also emphasized the cooperation between service providers and travel agents in Hanoi and other provinces to bring tourists to Son La.

Son La has a plan to develop the province’s tourism in the period of 2021-2023, which focuses on building 24 diversified and unique products. It will focus on tapping into local tourism resources such as Moc Chau National Tourist Area, Son La hydropower dam area including Quynh Nhai Lake, agrotourism and so on.

Tet Holidays: Four reasons for a shopping staycation in Saigon

Administrator - 7 February, 2021 0
The Hanoitimes - Tet is coming. Where is the best accommodation for shopping trips on the year’s biggest sales season in Saigon?

Hanoi, HCMC among most popular travel destinations in Asia

Administrator - 4 June, 2020 0
The Hanoitimes - Hanoi is introduced as a “feast for the senses” from its picturesque temples and pagodas to vibrant markets.