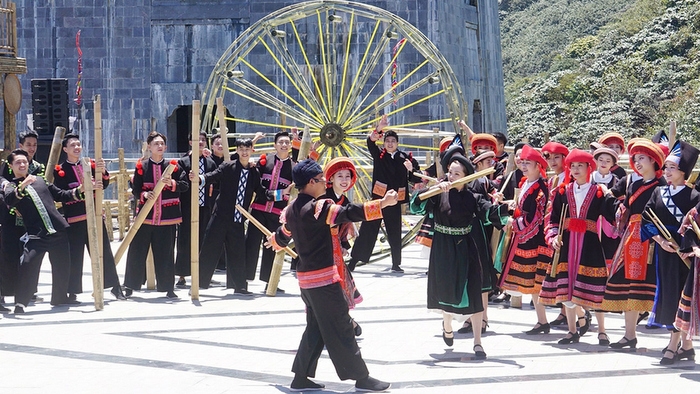 The above process is one of the important factors, in creating efficiency in the implementation of the Party’s guidelines on cultural revival and development in Lao Cai.

Lao Cai province has persevered and focused on the goal of developing the Lao Cai people comprehensively and rich in the cultural identity of each ethnic group; improving intelligence, creative capacity, social responsibility, civic duty and sense of law compliance to meet the requirements of the sustainable development of the province.

The principal of Ta Ngai Cho Secondary School, Nguyen Thi Thu Hang, said the artisans and parents of students are passionate about teaching and educating the love of cultural heritages among children. According to Secretary of Muong Khuong District Party Committee, Giang Quoc Hung, the development of models of cultural schools associated with ethnic groups’ identities has been conducted in many schools around the province with various activities such as learning brocade embroidery, collecting and displaying cultural features and teaching folk dances.

During the process of implementing the Resolution and action plan of the Lao Cai Provincial Party Committee for the 2015-2020 term, the province has issued 6/19 key projects and allocated resources for carrying out issues related to the construction and development of culture and people. Accordingly, the task of preserving and promoting the cultural heritage of the ethnic groups is the most necessary for forming an important resource for the socio-economic development of the province.

From the requirement of creating a civilised and modern lifestyle and cultural environment right from the “civil servants”, the province has launched an emulation movement of promoting office culture among cadres and civil servants. As a result, the administrative reform has recorded positive changes and remarkable achievements in terms of the satisfaction of people and businesses. The locality’s digital transformation has been conducted synchronously and effectively in the three fields of digital government, economy and society.

Thanks to the direction and synchronous implementation of agencies at all levels, the movement to develop cultural families, residential areas, agencies and schools has been widely developed. Chairman of the Fatherland Front Committee of Lao Cai province, Giang Seo Van, said the provincial authorities have directed localities to survey, investigate and classify areas to reach appropriate goals and methods. Accordingly, the localities have identified the preservation and promotion of the value of relic sites and cultural institutions as one of the criteria for building a cultural life at the grassroots level, towards building new-style rural areas and urban areas.

Many specific cultural models were built such as the cultural and tourism villages in Bac Ha district and Sapa town, and the health and culture villages in Si Ma Cai and Muong Khuong districts. They have had a positive impact on the cultural and socio-economic development of rural areas.

Cultural resources exploited for the development

In the actual process of its construction and development, the Lao Cai provincial Party Committee has consistently implemented the view of developing modern Lao Cai people but not losing their identity and associating cultural preservation with tourism development.

Thanks to the practical programmes and projects, on average, 6 to 8 heritage sites in more than 30 communes across the province have been inventoried each year. Up to now, nearly 20 special festivals of 13 ethnic groups, such as Mong, Dao, Tay, Nung, Giay, La Chi and Ha Nhi, have been restored and preserved. Many traditional festivals have been listed by the Ministry of Culture, Sports and Tourism among the national intangible cultural heritages.

The cultural and tourism villages have been built in various localities including Sapa, Muong Khuong and Bac Ha. They have significantly contributed to arousing the pride of traditional culture as well as honouring the beautiful cultural values and abolishing outdated customs.

The whole province has focused on building a healthy and integrated business culture environment, developing reputable and quality product brands that are imbued with the local cultural identity. The campaign of “each community, ethnic group and area has a speciality becoming a commodity” has contributed to creating resources for tourism development associated with the construction of new-style rural areas and sustainable poverty reduction in the province.

The process of exploiting the strengths of cultural heritages and scenic spots to develop tourism in association with building and promoting unique and local product brands to form unique tourist destinations has attracted more and more domestic and foreign visitors. Thereby, the socio-economic life of the locals has been improved while the traditional identity has been preserved and promoted.