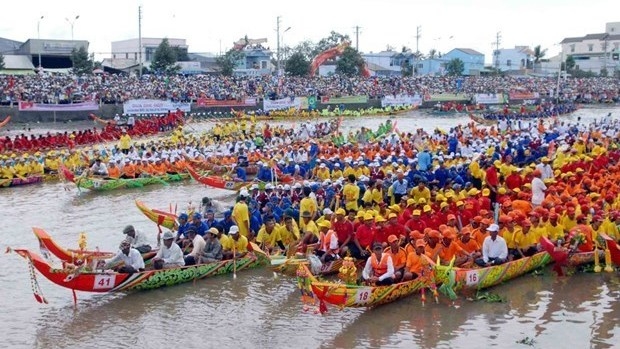 To celebrate the festival, part of the national intangible cultural heritage, a wide range of activities are taking place, including a cultural and tourism week, a festival featuring the southern region’s delicacies, an exhibition on the Mekong Delta’s tourism, an agricultural product fair, a Khmer costume contest, along with traditional sports activities.

Director of the provincial Department of Culture, Sports and Tourism Duong Hoang Sum said apart from helping with the preservation and promotion of Khmer people’s culture, the event, scheduled to last through October 31, is also an occasion to introduce local people and tourism potential to visitors, enhance the province’s tourism links with other localities, and attract investment in tourism.

The Ok Om Bok (moon worshipping) is one of the three main festivals, along with Sene Dolta and Chol Chnam Thmay, that Khmer people celebrate every year. It often takes place around the full-moon period of the 10th lunar month, after the harvest season.

Khmer people believe the moon is a god who controls the weather and crops. The worship aims to thank the moon for granting them good weather and bumper harvests, and to pray for better crops in the following year.

Administrator - 26 November, 2020 0
A very mysterious beauty with peaceful scenery and clouds have coated Da Lat in the first days of winter.

Administrator - 26 November, 2020 0
Prime Minister Nguyen Xuan Phuc attended the opening ceremony of the 14th ASEAN Ministerial Meeting on Transnational Crime (AMMTC 14) that was held in a virtual format on November 26.

Administrator - 26 November, 2020 0
The 38th Conference of the ASEAN Federation of Engineering Organisations (CAFEO 38) opened in Hanoi on November 25 under the theme: “Fostering Initiatives and Actions by AFEO to build a Sustainable and Prosperous ASEAN Community”.

Administrator - 12 September, 2020 0
The Hanoitimes - Coming to Ba Vi countryside farm in Van Hoa commune, Ba Vi district, Hanoi, tourists will immerse themselves in nature and have opportunities to play the farmers.