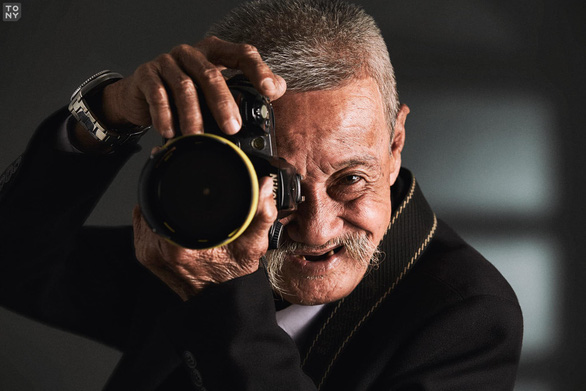 The creator of the clip wanted to give his colleague a memory of him and his camera.

The main character in the clip is 77 years of age and is often seen around the Diamond Plaza shopping center in District 1, where he takes photographs of passengers for a living, especially in peak seasons like Christmas, Thong said.

“Le Quang Liem [the old man’s name] is my senior because I am a photographer too,” Thong explained.

“My job and earning are stable because I can access better technology.

“I want to give him a photo album as a present because he works so hard.

“I capture him and his friend, the camera.

“With this photo collection, I hope that more young people get to know about him and use his service if they meet him in the street.”

Before Liem, Thong had contacted eight other photographers in District 1 but they simply turned him down.

When he met the old photographer, he first asked for a photo taken of himself, then offered to do the same for him as a memento.

Liem was excited and touched.

“I spent my whole life taking photos of others,” he confided.

“I couldn’t imagine that one day somebody would take photos of me.”

Thong and his partners at the studio were surprised when Liem showed up at their place on the morning of December 20.

“He is simply very lovely, with a positive outlook on life,” Thong recalled.

“He never complained about his hardship or poor plight during the whole photo shooting session.

“He was all smiles.

“To him, the camera was his daily companion.

“The old man said that he would only stop working when he could no longer walk on his own.

“That was a great deal of inspiration for us.”

As Thong recounted, Liem was a very thoughtful man. Due to the defect in his leg, sometimes he was not confident of the poses.

“If I can’t do some of these poses, please don’t get mad at me,” Liem told the crew.

Through his pictures of the senior man, Thong yearns to remind viewers that people should not take things of the past for granted despite the advanced phones that have made photography so easy.

In Thong’s opinion, the cost for Liem’s service is not too high, but each photo taken is a beautiful story in his book, and each customer is helping to preserve a job that might not exist anymore in the years to come.

Liem was born in 1945 in Binh Thanh District, Ho Chi Minh City. He said that more people have approached him for their photos taken ever since the video clip was uploaded to social media.

Some young people simply come and talk to him, treating him to some coffee or snacks.

He became a photographer in 1970. His first working area was the Saigon Zoo and Botanical Gardens, also located in District 1.

Later on, he moved to the Reunification Palace nearby and was quick to turn up on important occasions like university graduation ceremonies.

“I love photography. Sometimes I feel really bad because nobody needs me for their photos, but this career has chosen me, so I have to live with it,” he said.

“Being a photographer has helped me raise six children.

“They have grown up, so I am not under much pressure anymore.

“I will work until I can’t walk around any longer.

“Then I will keep the camera in my cupboard as a good memory.

“Before me, there was Ba Le.

“He took photos until his last breath at age 83.

He was such an idol, so I want to be like him.”

Administrator - 26 May, 2020 0
Many travelers believe that the Hanoi-Ho Chi Minh City train is one of the best ways to explore Vietnam as the north-south rail line runs through some of the most beautiful parts of the country.

Administrator - 21 March, 2020 0
Mother Goddess worship, or Dao Mau”, is very popular belief in an agriculture-based country like Vietnam, where farmers strongly depend on nature.