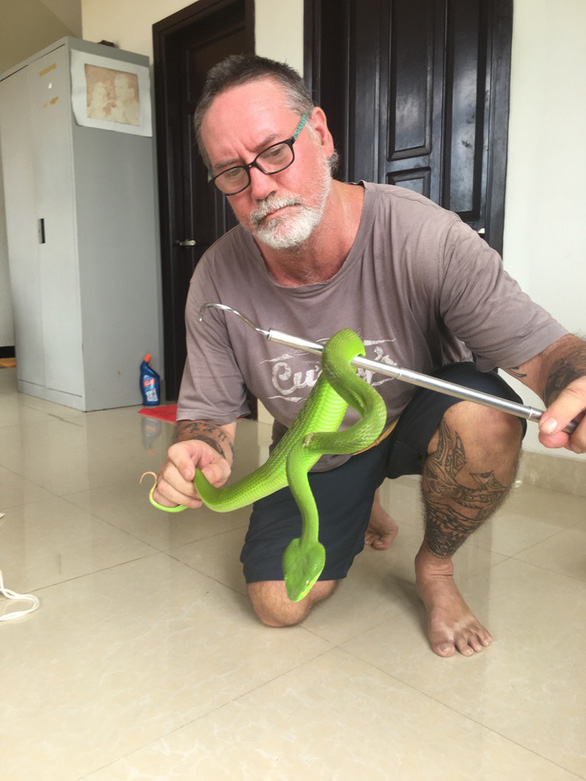 The group has set up a network to bring the snakes they rescued back to nature.

One night, Australian man Craig Ryan, founder of the snake rescue group, received a phone call from a man in Ben Tre Village, Cam Ha Commune in Hoi An who was in a panic.

He told Craig that he found a cobra in his house.

This phone call startled Craig. He wore long-sleeve clothes, took a specialized snake hook, and drove to the house.

Craig pointed his flashlight to a shoe where the snake was, and he realized this snake was a cobra weighing around 300 grams and measuring 45 centimeters long.

He then carefully caught the snake with his specialized hook.

The snake suddenly turned its head toward the Aussie and stuck out its tongue to aim for an attack.

However, Craig soon controlled the situation with some simple moves. The snake lay on his hook calmly and was taken to a safe place far away from local people.

Talking with Ryan, the man said he saw the snake in a shoe when he tidied up his pairs of shoes.

As he knew the Australian man from before, he called him for help.

This is one of the cases that Ryan and his team handled in Cam Ha Commune.

Max Ryan, 22, son of Craig Ryan, is also a member of the snake rescue group.

Craig said he and his son have the same passion for researching and taking photos of snake species. Both are well known for their passion.

They have worked as snake rescuers for decades.

Every time locals find wild snakes in their houses or surrounding areas, they call the team.

Their passion for snakes is so big that the father and son have set up a network providing information and rescuing snakes nationwide.

Like Craig and his son, Hoang is willing to rescue wild snakes day or night.

Hoang said since he was a kid, he has had a special interest in wildlife, especially reptiles.

Hoang met Max years ago when he strolled around Son Tra Peninsula in Da Nang to take photos of wild animals.

They then became close friends, always making trips to forests and researching wild snakes together.

Hoang was surprised when he learned that his friend’s father runs a network saving and protecting snakes, so the Vietnamese then took part in the network.

The group with three official members created a Facebook fan page to share videos and information related to wild snakes, how to get rid of venomous snakes, and set up a hotline to support people when needed.

Hoang, Max, and Craig have connected hundreds of people with the same enthusiasm and passion for the reptile across the country.

In their free time or on weekends, they go to explore the life of wild snakes in forests, shoot photos and videos of them, and give locals instructions if they have an encounter with a venomous snake.

Craig said he encountered venomous snakes when he was just an eight-year-old boy.

In Australia, everyone is taught to respect animals. They often call police or rescue forces when they see snakes, instead of killing them.

However, when Craig and his family moved to Vietnam in 2011, he realized the Vietnamese did not do that.

“Snakes are not a dangerous animal and have the right to live like other animals,” said Craig.

“The reptile attacks humans only when they attack it first, step on its body, or trespass on its shelter.

“This attack is an instinct to protect itself.

“When we understand the reptile, it is just a harmless animal.”

He added that the Vietnamese do not really care much about snakes as well as other wild animals.

Most of them cannot distinguish between venomous and non-venomous snakes.

As long as they see a snake, it is killed. It is their common reaction. The snake dies immediately, or worse, it becomes a dish.

“I want to change this. We have a network of partners who know the reptiles very well. We not only rescue snakes but also share information about them with everyone,” Craig said.

“The group has received more and more phone calls.

“After rescuing a snake, we find a safe place to release the snake or hand it to rangers.”

The wild environment is perfect for snakes

Group member Hoang said they receive around 10 phone calls asking them to rescue snakes each month.

Skillful members take turns handling rescue cases and finding safe places for the snakes they have saved. They all volunteer to do such things.

Craig, his family members, and friends have become experts in rescuing snakes.

During a trip to Phu Quoc Island, off southern Vietnam, his wife surprised a receptionist in a resort by catching a snake with her bare hands.

“Killing snakes or raising them is persecution. The wild is perfect for them and humans should respect them,” said Craig.