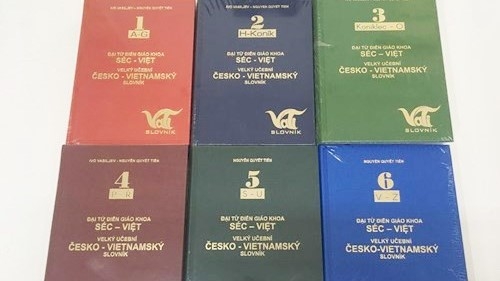 The complete collection of the Czech-Vietnamese encyclopedia was launched in the Czech Republic in July 2019. It aims to serve Vietnamese expats and Czech people who want to learn Vietnamese. Considered a bilingual encyclopaedia, it covers a wide range of subjects, including society, culture, history, biography and geography.

The award ceremony is scheduled to be held during an international book fair in Prague on May 15.

The encyclopaedia was also among eight works honoured at the 2019 award for literature by the Czech Writers’ Association in Prague in recognition for its significance to the country’s literature and culture.

Vasiljev died on October 23, 2016 at the age of 81 when he just started to write the fifth volume.

After Vasiljev died, Tien said that he was still determined to complete the six-volume encyclopedia as his late fellow’s will.

JTP was founded in 1990 and currently has over 500 professional translators, interpreters and translation teachers actively working in the Czech Republic, Slovak Republic and other countries.

Since its inception, the union has proven itself to be an important representative of professionals in the field of interpretation and translation. It aims to achieve social recognition and adequate assessment of the profession and at the same time increase the level of professional colleagues.

Writer To Hoai: Treasure of Hanoi

Administrator - 12 December, 2020 0
The Hanoitimes - On the 100th anniversary of the writer To Hoai's birthday (1920 - 2020), Kim Dong Publishing House held a seminar titled "To Hoai - Writers of all ages". The seminar is an opportunity for writers and poets nationwide to exchange and share new perspectives on the career of writer To Hoai.