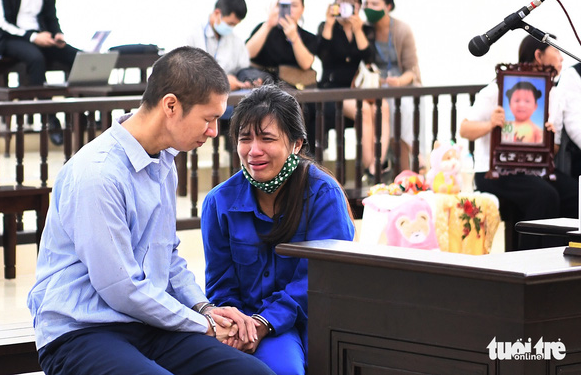 The municipal People’s Court on Thursday concluded the two-day trial of Nguyen Minh Tuan, 31, and Nguyen Thi Lan Anh, 29, who were responsible for the death of Anh’s three-year-old daughter.

Tuan was given capital punishment for murder and 30 months in prison for illegally possessing drugs.

Anh was sentenced to life in prison for murder and 18 months behind bars for the illegal possession of narcotics.

According to the indictment, Anh had a three-year-old daughter – N.N.M. – with her first husband.

Following their divorce, Anh and Tuan got married and moved in together in 2018, while M. lived with Anh’s mother. Anh and Tuan later had a child together.

In early February, Tuan bought VND2.3 million (US$99) worth of narcotics for personal use.

On March 5, Anh brought M. to her house for a visit.

Anh and Tuan said that they put the child inside a plastic washbasin when she did not behave and beat the child with a metal broom handle throughout the night of March 29.

Tuan consumed drugs and continued beating the child throughout the night.

At around 8:00 am the next morning, M. was having difficulty breathing and was sent to the hospital where she passed away at 11:00 from traumatic brain injury.

At the trial, Tuan said he only hit M. a few times, adding that the girl might have died from a cold.

The jury asserted they had sufficient evidence regarding the case to hand Tuan the death penalty.

As Anh failed to protect her daughter, the jury said she deserves a similar punishment but would only sentence her to life behind bars as she still has another young child to raise in accordance with local laws.

This article was originally published on Tuoitre

Administrator - 14 November, 2020 0
Famous landmarks like One Pillar Pagoda in Hanoi have become miniatures made of toothpicks and mica in Hoang Tuan Long's skilled hands.