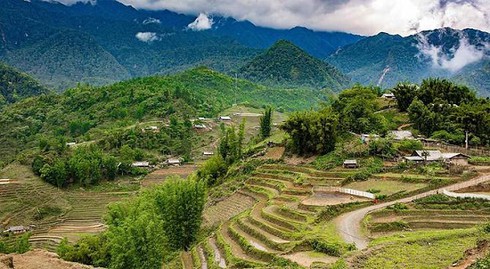 Sapa has gained the first position among the cool weather holiday destinations in Southeast Asia throughout the year, according to Channel News Asia, a Singaporean English language Asian cable television news agency.

Located 350km northwest of Hanoi, Sapa town enjoys cool weather throughout the year – it rarely goes above 25 degrees Celsius and it never drops below 17 degrees Celsius even during the “hottest” periods between June and August.

“Your best bet for a chilly holiday would be from November to February, with average high temperatures of between 17 and 11 degrees,” Channel News Asia wrote.

Once there, you can enjoy trekking through the Hoang Lien National Park, and catching a glimpse of Vietnam’s highest peak, Fan Si Pan, as well as views of terraced rice paddies. There are also lots of highland tribal culture to be seen, at villages such as Cat Cat and Ta Phin, as well as in markets. It also has its own colonial history – French military and missionaries set up camp here in the 19th century.

Earlier, Sapa has been named among the top ten places to visit in Southeast Asia, as selected by the readers of Rough Guides, a UK-based travel website.

The northwest town of Sapa in Lao Cai province occupies the 6th place on the list. Die-hard fans of Vietnam will know that this former hill station is the place to visit for a taste of heart-stirring Southeast Asian scenery, according to the Rough Guides article.

In 2017, Prime Minister Nguyen Xuan Phuc signed a decision recognizing the resort town of Sapa as a national tourism site.

Sapa welcomed nearly 1.5 million visitors in the first eleven months of 2017, of which more than 30% were international tourists. In 2016, there were 1.2 million visitors to the hill town, according to the Lao Cai Department of Culture, Sports and Tourism.

Agoda reveals tourism trends in Vietnam after the Covid-19 pandemic

Administrator - 16 October, 2021 0
NDO - Sixty percent of Vietnamese anticipate restriction-free domestic travel within six months, while only forty percent expect international travel to be reopened, according to newly a released survey called 'Return to Travel' by Agoda.