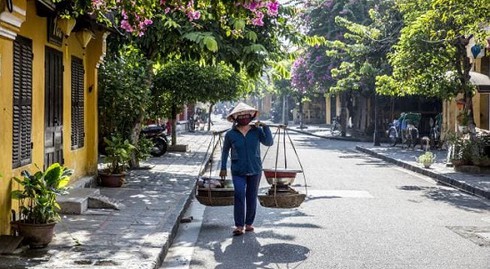 The writer advised travelers that Hoi An is Vietnam’s capital of cool stuff. The enchanting “City of Lanterns” is certainly one of Vietnam’s dreamiest destinations.

Situated in the central Quang Nam province, Hoi An is skirted by lush rice paddies and mere moments from the unspoilt sands of the coastline best beaches.

“Set along the Thu Bon River, the picturesque network of canals, elaborate bridges and beguiling backstreets have earned Hoi An the endearing title of the “Venice of Vietnam,” Vogue wrote.

Enjoying the Vespa food tour is one of the best ways to explore Hoi An cuisine. This whirlwind food tour with Vespa Adventures will have you gripping on the seat of your scooter, speeding through the backstreets of Hoi An, sampling many of the favorite local dishes at carefully-chosen eateries along the way.

Earlier, Hoi An ancient town in Quang Nam province has been named among the best places to finish the year with some sun, according to inews.co.uk, a British newspaper owned and published by Johnston Press.

According to the British newspaper, Hoi An has everything, including heritage architecture, a superb food scene and a string of perfect beaches. An Bang, about 5km (an easy bike ride) from the center, is the one to go for.

“Recover from a hard day at the beach with dinner – as a historical trading town, there are Chinese, Japanese and Portuguese influences on the food”, Vogue recommended.

In 2017, Hoi An received 3.2 million tourists, a year-on-year increase of 21.66%, according to Quang Nam province’s Department of Culture, Sports and Tourism. The figure comprises 1.78 million foreigners and 1.44 million domestic ones.

Administrator - 18 March, 2020 0
La Brasserie is a seafood buffet restaurant located in the Nikko Hotel Saigon, and is one of the most recommended places in the city for seafood lovers. Their buffet is well known for its lobster, oysters, sashimi, shrimp, crab and more. During dinner you will be accompanied by live music which gives the place that a touch of sophistication. Forget images of pushly lines of diners all clambering for the freshest plates of food; the atmosphere at La Brasserie is classy and has a homely feel to it thanks to its interior and hospitality.

World’s most expensive bowls of Vietnamese Pho enlisted by foodlovers