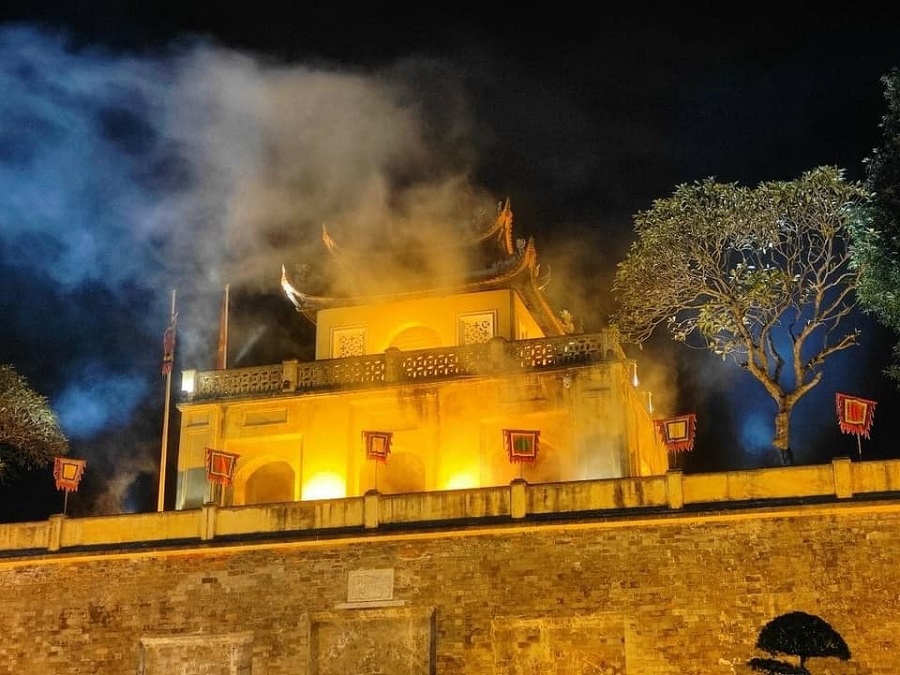 The “Deciphering Thang Long Imperial Citadel” night tour is a new and attractive tourism product for visitors who want to have a different experience of the relic by visiting it at night.

Turns back the time

As a heritage site with thousand years of history, Thang Long has always been a political and cultural center of the country for nearly eight centuries. Through historical ups and downs, the interwoven layers of cultures and relics here are the vestiges of the golden past.

“Deciphering Thang Long Imperial Citadel” is a nighttime tour that takes visitors back in time on a 90-minute journey through over 13 centuries of Vietnamese history.

It’s 7:00 PM on a Saturday in June, under the shimmering yellow LED lights, the scene of Thang Long Imperial Citadel becomes mysterious that is far different from daytime. And the exciting night tour to help visitors discover history is officially started.

Passing through the main gate of Doan Mon, where the sacred spirits of thousand-year-old rivers and mountains converge, visitors can touch the mystery, experience the feeling of walking on the middle path like kings, and explore the residence of the royal family in the past.

According to renowned Vietnamese local historian Le Van Lan, Doan Mon gate, facing south was built under the Le Dynasty in the 15th century. It was later renovated several times, the most important one was carried out during the Nguyen Dynasty in the 19th century.

“Together with the gorgeous architecture inside the citadel, the gate used to play a very important role in the ceremonies of the feudal royal in the past,” he stated.

The three-story building was constructed of stone and brick. Its first floor is a five-door archway, of which the largest one in the middle was reserved exclusively for the emperors to walk through while the smaller ones were for the mandarins and members of the royal family. In addition, there are sub-entrances on either side of the wall of Doan Mon gate.

As an extra appeal of the program, which helps people to understand the royal life in the past, visitors to Thang Long Imperial Citadel are invited to enjoy ta court session opening ceremony of ancient kings and the ancient dance entitled “Thang Long Imperial Palace”.

A thousand years of history from underground

After the performance, the next stop is a gallery exhibiting artifacts found through excavations on the site.

Along with significant discoveries of architectural vestiges, a large number of ceramics – which were items of everyday use in the palace through various periods – have also been found, enriching the study of Thang Long pottery and royal ceramics through the ages.

One among the highlights of these artifacts is the “phoenix-themed Bodhi leaf” made of terracotta. According to the national treasure record composed by the Institute of Imperial Citadel Studies, it is one of the most beautiful artifacts found so far that remained almost intact.

The artifact consists of the main part and the pedestal. The main part was shaped like a Bodhi tree leaf, and its two sides were extensively decorated with a pair of phoenixes.

In addition, visitors to the Thang Long Imperial Citadel has also a chance to admire the top-notch porcelain-making technique of Vietnamese artisans during the Le Dynasty.

The two translucent porcelain bowls painted with a dragon motif are national treasures, regarded by scientists to be among the rarest and most precious royal ceramics in the Thang Long Imperial Palace during the Le Dynasty’s Early Period in the 15th-16th centuries.

This is a discovery of great scientific importance in the history of ancient Vietnamese ceramics, showing solid evidence of the products of the Thang Long court pottery kiln.

Passing through the gallery, visitors head to the soul of the ancient Thang Long citadel: the remains of the Kinh Thien Palace built under the Le Dynasty. On the doorstep of the palace, visiting groups will perform an incense offering ceremony, expressing gratitude to the kings who contributed to building the Imperial Citadel.

Continuing the program, visitors will enter the archaeological site with an area of about 3.3 hectares. The “wall of time” with bricks that have existed for 1,300 years as well as an ancient river were faithfully recreated.

Visitors also have the chance to drink the water from the well that was once for the exclusive use of the royal family.

The details and hints of the deciphering activity are revealed in turn on the last stage of the journey. Based on modern technology, some typical artifacts of the Imperial Citadel are shown with laser light on the archaeological remains for visitors to figure out and find the answer for themselves.

At the end of the experiential journey, visitors who decipher correctly will receive interesting gifts from the organizers, then everyone will sit down and enjoy tea together with candied lotus seeds.

“The scene of the sacred citadel at night is extremely mysterious, making the exploration of the imperial citadel more interesting. Through the tour, I had the opportunity to discover many precious antiques as well as learn about the history of Thang Long Imperial Citadel in particular and Vietnam in general,” she told The Hanoi Times.

“The program was piloted in 2021 but then suspended due to the impact of the Covid-19 pandemic. Until recently, on the April 30 – May 1 occasion, the program was resumed, she said.

“In the itinerary to visit the Thang Long Imperial Citadel, there are many more locations, but after considerations, we have selected the most prominent areas included in the program,” she added.

The representative of the relic also stressed that through the night tour, Thang Long Imperial Citadel Managing Board wishes to bring an unforgettable experience of Thang Long royal palace as well as the feeling of living in the ancient time to the visitors.

They also want to introduce and highlight the precious archaeological relics found excavated at Thang Long Imperial Citadel through a deciphering game, creating a fun atmosphere and making the information easier to assimilate and remember for the relic’s guests.

The “flowers” give off fragrance for life

Administrator - 25 July, 2021 0
The history books in English do not only teach children a basic knowledge of Vietnamese history but also inspire them with patriotism and national pride.