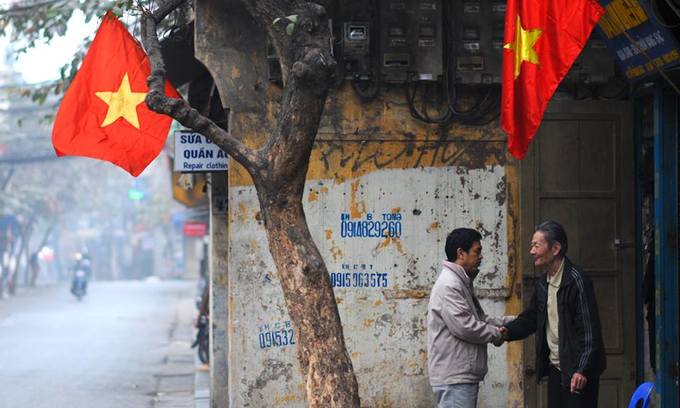 Tet in Vietnam is an ocassion to express respect and gratitute to elders, either relatives or neighbors. Photo by Giang Trinh.

The reunion of generations of family members, respect for elders and homage to ancestors are among the most appealing Tet traditions for foreign hoteliers in Vietnam.

Vuko Kralj was awestruck by the sight of vibrant blooms flooding local markets and streets at Tet (Lunar New Year) time during his first trip to Vietnam in 2013. He also remembers how people dressed in the traditional ao dai were having their pictures taken.

But awed as he was, it was only when Kralj moved to work in Vietnam that he realized the deep significance of Tet for Vietnamese people.

After living in the country for many years, the general manager of Azerai Resort Can Tho in Can Tho City is still struck by the reverse migration of youth from cities to the countryside to celebrate the Lunar New Year with their parents and other relatives.

Today, one of his favorite activities every year is welcoming multi-generational groups of guests traveling after the third day of Tet. “I am truly moved when I see the care and respect that the younger generations show towards their parents and the elderly,” he said.

For Anthony Slewka, director of sales at Sofitel Legend Metropole in Hanoi, the most treasured memory of Tet took place in 2015.

That year, Anthony was invited to a local family’s gathering in the outskirts of Hanoi on the first day of the Lunar New Year. He had the opportunity then to individually greet every household in the area, sip herbal tea and exchange anecdotes with the hosts.

“The one detail that struck me was how the layout of a house is very traditional. All spaces are open with a distinctive, separate, formal area for the ancestral altar. The TV is typically placed in the center of the house,” he recalled.

Pichler finds some similarity in Tet being a time for family gatherings and reunions and Christmas time in Austria, where he comes from.

In the 15 years that he has lived and worked in Vietnam, Pichler has created many Tet memories with his second family, the resort staff. Together, they decorate the resort, organize festive events and prepare scrumptious meals to welcome tourists to their “collective abode.”

Adam Calver, director of golf and destination marketing at Laguna Lang Co resort complex in Thua Thien-Hue Province, gained memories for a lifetime with his first Tet in Vietnam.

Many years ago after his arrival in the country, Calver was invited to participate in traditional Tet activities where he learned a lot about cultural practices like lucky money (li xi).

He likes how the country as a whole vibrates with excitement and elation during Tet. Though the official holiday spans just three days, the celebrations last a week or even longer.

Calver recommends Vietnam to his friends as a great travel destination at Tet time. “All the long-standing customs and traditions are amazing. Tet is an essential holiday that needs to be experienced in person in order to fully grasp just how interesting and thrilling it is,” he said.