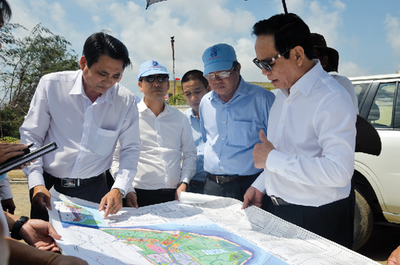 Tra Vinh, a coastal province in the Southeast of the Mekong Delta, is calling for further investment in a range of projects worth a total of over US$1 billion in the fields of industrial sector, tourism, agriculture and technical infrastructure development.

To turn this ambitious plan into reality, Chairman of the Tra Vinh province People’s Committee Le Van Han has recently pointed out three breakthrough missions for the locality in the coming time, including infrastructure development with a focus on transportation and facilities of economic zones and industrial clusters.

“We will focus on administrative reform and perfecting legal framework to ensure a transparent and fair business environment for all economic components,” Han said.

Han said as the province aims for rapid and sustainable economic growth, a breakthrough in science and technology development must be a priority.

With a 65 kilometer-coastline, Tra Vinh, a coastal province in the Southeast of the Mekong Delta, holds favorable conditions to promote maritime and agricultural economy.

As a gateway to the Mekong Delta region, Tra Vinh is located between the Tien and Hau rivers, two tributaries of the Mekong Delta, and boasts a large network of waterways – and roads with four seaports.

Meanwhile, a biodiverse natural environment with brackish water, freshwater, and seawater allows the province to produce a variety of agricultural products such as tiger prawn, catfish, fruits and rice at mass quantity.

Under the government’s overall plan for growth, Tra Vinh is envisioned to have one economic zone in Dinh An with an area of 39,000 hectares and 16 industrial clusters, in which Dinh An economic zone would be one of the two coastal economic zones of the Mekong Delta region.

While these remains a plus point, it is the efforts from local authorities in laying the groundwork to ensure long-term success for investors that has truly made the province a destination for businesses.

At present, Tra Vinh is home to 375 ongoing projects, including 41 from foreign investors worth a combined US$3.1 billion.

Administrator - 21 March, 2021 0
Thanh Toan Bridge in Vietnam's former imperial capital Hue has been rejuvenated thanks to a 10-month restoration.

Administrator - 20 April, 2020 0
The central city of Hue is famed for its ancient palaces, mausoleums, pagodas and temples, and one of the most impressive destinations in the former imperial capital is Huyen Khong Son Thuong Pagoda.