Home Attractions The reasons that make Son Doong Cave to be a great wonder... 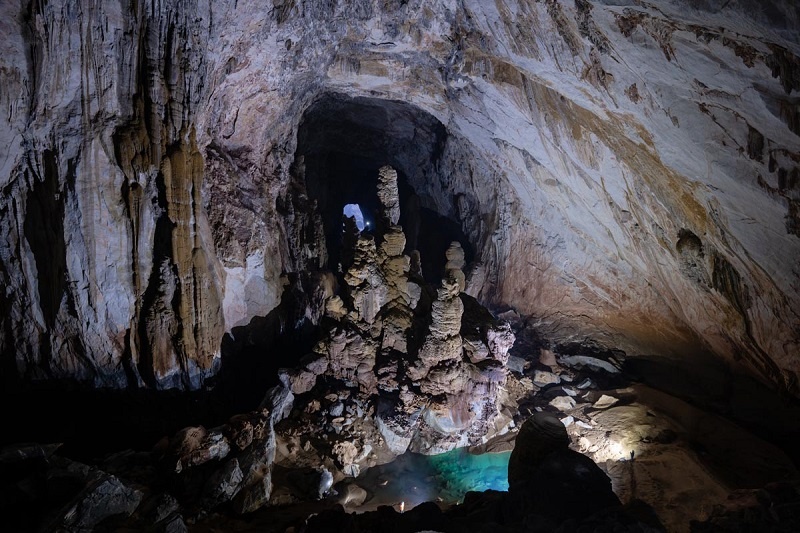 Much like Mt. Everest, the Grand Canyon and the Great Barrier Reef, Son Doong Cave in Quang Binh province, central coast of Vietnam is now considered as one of the world’s great natural wonders. Let’s discover the ten reasons as listed below.

There are a number of ways that you can quantify the size of a cave, but measuring the cross-section of the largest chamber tends to be the most popular way to do it.

By this measure, Son Doong Cave is bigger than any other cave on the planet. To help put things into perspective, some of the chambers in the cave are taller than the Great Pyramid of Giza in Cairo.

According to the cave expert,Howard Limbert, the cave would be like someone found a lump on top of Mount Everest, making it another 1,000 meters higher.

Toward the cave’s exit sits a gigantic lake. The lake is so big and so deep that you’ll glide across it on small row boats.

Son Doong Cave is nine kilometers long, and yet it’s rarely pitch-black. That’s because it’s punctuated by two huge ceiling collapses that invite light to pour into the cave.

Beneath these vast holes in the ceiling lie underground jungles. As the microclimate of the cave is different to that on the surface, the jungles are also different from flora species that you won’t find outside the cave.

Son Doong Cave’s towering stalagmites are nothing short of extraordinary. Some stalagmites are taller than the Arc de Triomphe, and others form outlandish and mesmerizing shapes.

Son Doong Cave has its own ecosystem, and in some ways that’s true. You may come across an array of wildlife while inside the cave, including howling monkeys near the collapsed, translucent cave insects, squeaking bats and blind fish.

With various underground rivers and pools in Hang Son Doong, expeditions to the cave overflow with wading, paddling and swimming opportunities.

Son Doong cave is so big that it has its own weather, evident by the sunbeams that shoot down from the cave collapses and the mist that floats through the chambers.

Hanoi to link with other localities to boost tourism growth

Administrator - 17 November, 2020 0
The Hanoitimes - From now to the end of 2020, the tourism industry of the city will boost cooperation with localities nationwide to stimulate domestic travel.

Administrator - 28 February, 2021 0
The Hanoitimes - Being ranked at the 15th position, Phong Nha- Ke Bang National Park is the only national park in Southeast Asia to appear on the list compiled by TripAdvisor.