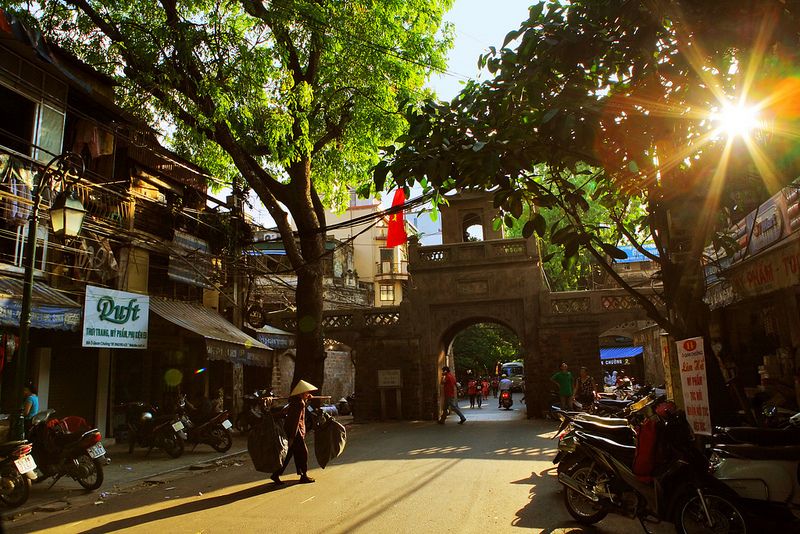 At the age of 74, Mr. Ta Van Nhan has taken care of Quan Chuong Gate for over two decades, as a way to help preserve the historical and cultural relic of the city.

A pride of Hanoians

Located in the Old Quarter, the center of Hanoi, Quan Chuong gate was built in the 18th century and named Dong Ha at the beginning. It is the only among 21 gates of the city that has remained today.

The main entrance of the gate faces east and the Red River, while its rear looks west and Hang Chieu Street. The gate has three arched doorways, a guarding gazebo on top of the main door. In the past, it was a large thick wooden gate where at night the soldiers closed it and opened it early morning for people to enter the ancient citadel.

It has been a part of the life of many people in Hanoi. It is also a historical relic where a troop of the Nguyen Dynasty fought the first French attack on the city in 1873 through Dong Ha gate. Then the gate was renamed as Quan Chuong to commemorate the merit and sacrifice of the military official who led the gate defense.

Through many years of ups and downs of the city, Quan Chuong gate still keeps the ancient and majestic beauty, a pride of the residents. It is one of the attractions of Hanoi, drawing a lot of people to visit, especially on weekends and holidays.

Every day, the bustling life goes by under the gate. Vehicles and people pass through its stone-paved floor day by day, creating a beautiful picture of the combination of the past and the present of Hanoi that impresses many visitors.

It’s not an exaggeration to say that the antiquity and firmness of the gate is preserved thanks to Mr. Nhan’s contribution. Born and raised in a house which is only about 50 meters from the gate, Mr. Nhan believes that his bond with the gate is a destiny.

Witnessing a lot of upheavals of Hanoi over the years, Mr. Nhan said that Quan Chuong gate still look the same as it was when he was a child and he wants to contribute to preserve this beauty.

About twenty years ago,  moss invaded the wall of the gate in the rainy season and wild plants plagued all over it. Sometimes, street vendors occupied the gate for selling. It was a headache for the local authority as the local militia could not keep watch on the gate around the clock. Then Mr. Nhan volunteered to do the job.

Since then, every day from 6am to 6pm, Mr. Nhan cleans the gate and area around it, prevents street vendors and others from using it for their personal purpose.

It is not a hard job but requires much patience because he has to deal with all kinds of persons, according to Mr. Nhan. There are some people were angry with him when being caught littering at the gate. “Some even insult me. I was very annoyed and sometimes I wanted to quit. But it is hard to find my replacement so I continue it,” he said.

Besides guarding the gate, Mr. Nhan also offers incense and performs worshiping ritual ceremonies for the gate tutelary genie. “For me it is like my second home with many memories. I hope that the next generations would also keep this gate clean and beautiful to fulfill its function as a welcoming place for all visitors,” he said, before adding that he would take care of it as long as he lives.

Administrator - 25 December, 2020 0
The Hanoitimes - As a historical, cultural and scientific institution in Hanoi, the Vietnam Air Defense - Air Force Museum (or VAD-AF museum for short) is not only a place for educating patriotic and revolutionary traditions but also an attractive tourist destination, drawing a large number of domestic and foreign travelers.

Phong Nha, Hoi An and Ninh Binh are the top three...

Administrator - 28 January, 2021 0
The Hanoitimes - Three destinations on the top list of Traveler Review Awards 2021 that any travellers should visit once among their lifetime.