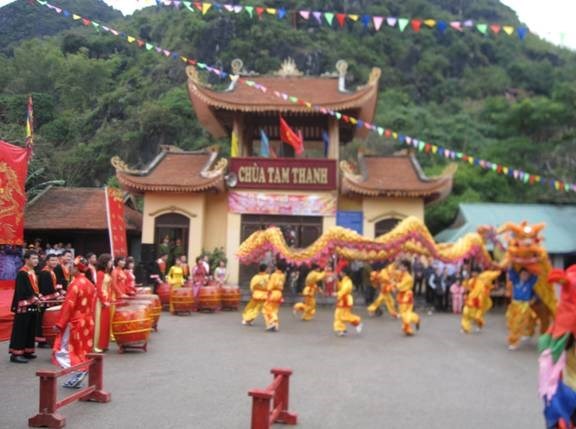 Amid the hustling city of Lang Son, the in-cave pagoda welcomes flocks of
tourists and pilgrims thanks to its rich spiritual, cultural and historical
values.

Tam Thanh pagoda was built for Taoism worshipping during the Le Dynasty, which
reigned from1442 – 1789.

However, as Taoism’s position
in society faded, the venue was turned into a worshipping venue for Buddhism
and Mother Goddesses.

Tam Thanh pagoda is a must-see attraction in any tour to Lang Son province.

According to Hoang Minh Thien, Tour Guide,Tam Thanh and Nhi Thanh are the most
outstanding tourist attractions in Lang Son city. The sites have a significant
spiritual value and were recognised as a national historical and cultural relic
site in 1962. They welcome 200,000 tourist arrivals per year.

Tam Thanh pagoda is home to various religions with statues and steles standing
for centuries. One of the most noticeable statues in the cave is the Amida
Buddha, casted in 16th century.

Besides contemplating religious, historical and artistic values, many visitors
come here to enjoy the breathtaking and mysterious beauty of the centuries-old
worshipping venue.

Nguyen Bao Lam said he has always wanted to visit Tam Thanh pagoda as it is
mentioned in many old sayings and folk songs.

He was amazed when first stepped in this pagoda, saying that the pagoda is
different from any pagodas he has visited as it is in a cave.

Tam Thanh pagoda, with its rich historical and cultural values, is one of the
most beautiful sites of Lang Son along with the Rampart of the Mac dynasty and
To Thi mountain./.

Phu Quoc not ready for foreign tourists next month

Phu Quoc not ready for foreign tourists next month

Administrator - 22 September, 2021 0
NDO – Italian poet Emanuela Rizzo, an art enthusiast whose poems have featured poetry in Italy and some other countries, has recently translated works by several Vietnamese poets and published them on the famous poetry site “Future Poetry” in Italy..

Administrator - 7 November, 2020 0
According to a report released by the General Statistics Office, Vietnam welcomed 14.8 thousand foreign travelers in October, up 7.6% over the previous month and down 99, 1% over the same period last year.

Administrator - 18 March, 2020 0
Surrounded by rivers, Vam Sat Mangrove Forest Eco-Tourist Site in the Can Gio Biosphere Reserve has the most beautiful forests. It has been recognized by the United Nations World Tourism Organization (UNWTO) as one of the world’s eco-tourist sites with sustainable development in Vietnam.