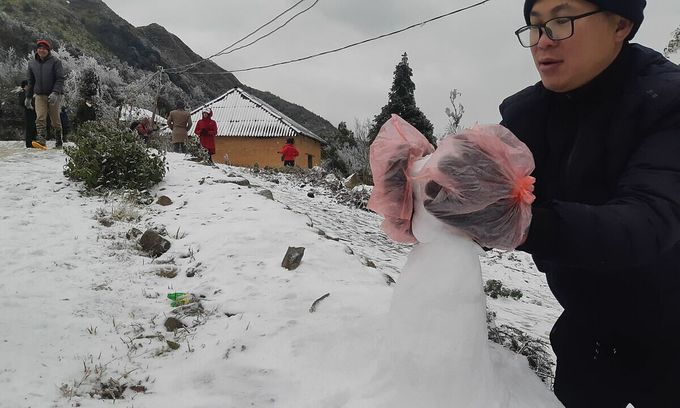 Mountainous areas in northern Vietnam raked in tourism revenues in the last few days owing to a surge in visitors flocking to admire the bout of frost and snow.

Authorities in Bat Xat District of Lao Cai Province said more than 3,000 tourists had visited the locality between Jan. 9 and 11, with half staying at homestays in Y Ty, a commune famed among Vietnamese trekkers for its beauty at cloud level.

With the occupancy rate at 95 percent, the district earned tourism revenues of VND2 billion ($87,100) in three days.

Last Sunday night, snow started falling on Y Ty as local temperatures dropped to minus one degree Celsius. Northern Vietnam has suffered a week-long cold spell caused by a strong cold front that sent temperatures plunging to below zero and covered the region in snow.

Nguyen Viet Tuan, head of the culture and information division of Hoang Su Phi District in neighboring Ha Giang Province, said over the past four days, the number of tourists to frost- and snow-covered Chieu Lau Mountain increased dramatically to about 200-300 a day, spending around VND800,000 ($35) each.

Data from the management office of Mau Son Tourist Area in Lang Son Province shows that between Jan. 8 and 10, around 5,500 tourists came to the area. Nine accommodation sites in the tourist area were fully booked since weather forecasts of frost and snow first appeared.

In Cao Bang Province, the peak of Phia Oac Mountain in Nguyen Binh District, welcomed more than 2,500 visitors between Jan. 8 and 11. Room occupancy rates in the district reached 25 percent. At a height of 1,931 meters above sea level, Phia Oac is the second “roof” of Cao Bang, after the Phja Da peak.

Vietnam has experienced a colder winter than usual this year as the Pacific Ocean sea surface temperature drops, forming the La Niña phenomenon, according to experts.

The country typically encounters a tropical climate with annual average temperatures ranging from 22 to 27 degrees Celsius. But the northern highlands have seen frost and snow each winter in recent years.

Though the tourism sector is happy with the surge in visitor numbers, locals felt the brunt of snowy weather, which typically affects their livelihoods.

More than 1,000 cattle died due to the cold weather while thousands of students were forced to stay home. Many farmers lamented the fact they had little choice but remain home while their rice fields and orchards were weighted down with thick snow and frost.

Administrator - 17 January, 2021 0
Travel firms have suggested making Covid-19 insurance compulsory for all inbound and outbound travelers as one of the solutions Vietnam needs to apply after it receives foreign travelers again.

Lao Than peak in ocean of clouds

Administrator - 21 March, 2020 0
On the outside and the inside, a cafe has almost effortlessly brought the charm and spirit of Hoi An to Saigon.