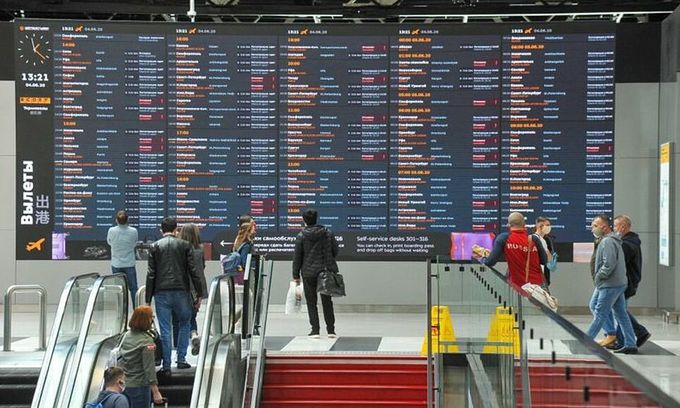 Passengers are seen in front of a departures board at Sheremetyevo International Airport outside Moscow, Russia, June 4, 2020. Photo by Reuters.

Russia is looking to restart commercial flights later this month with Vietnam, India, Finland and Qatar after certain epidemiological criteria are met.

The Russian anti-coronavirus crisis center announced Saturday that after discussing and taking into consideration the epidemiological situation in certain countries, the center has taken a decision to resume reciprocal international air routes between Moscow and Hanoi, New Delhi, Helsinki and Doha from January 27, Russian news agency TASS reported.

The decision was made based on announced criteria: not more than 40 new cases of Covid-19 per 100,000 of the population per fortnight; not more than one percent of a single-day rise of new cases for 14 days; and reproduction number of coronavirus at below one for seven days. It was also based on reciprocity principles, the center said.

Russia’s move comes even as the Vietnamese government has limited inbound flights from now until the Lunar New Year holiday in mid-February in light of new variants of the novel coronavirus spreading fast in many countries.

On January 5, the Vietnamese government had suspended flights from countries and territories with the new variants, starting with the U.K. and South Africa.

Vietnam has suspended all inbound international commercial flights since late March, but the government has been operating repatriation flights to bring home Vietnamese citizens stuck abroad amid the pandemic.

All entrants have to go through a 14-day mandatory quarantine except for cases determined differently by the Ministry of Foreign Affairs.

While Vietnam announced the resumption of commercial flight routes with six countries and territories – mainland China, Japan, South Korea, Taiwan, Laos and Cambodia – last September, it still does not allow inbound flights, apart from special flights to bring experts in.

The country has been successful in containing the pandemic with strict quarantine and tracking measures. It has only had 1,537 infections and 35 deaths so far, and has not reported any community transmission for the last 44 days.

Russia is currently the world’s fourth largest Covid-19 hotspot with 3.54 million infections and 65,085 deaths. It plans to launch mass vaccinations for the virus on January 18.

A Vietnamese specialty is among CNN’s nominations for 20 of the best soups around...

Administrator - 6 March, 2021 0
The Hanoitimes - The CNN U.S television channel has recently ranked the Pho bo or beef noodle soup at the second position among 20 best soups of the world.

Administrator - 6 March, 2021 0
A delivery man, 31, has become a real-life superhero after saving a two-year-old girl as she falls from the 12th floor of a 16-story building in Hanoi, Vietnam.

Palace where Nguyen king was incarcerated for being anti-French

Administrator - 18 March, 2020 0
The White Palace in Vung Tau Town was where King Thanh Thai, the 10th ruler of the Nguyen Dynasty, was once confined.