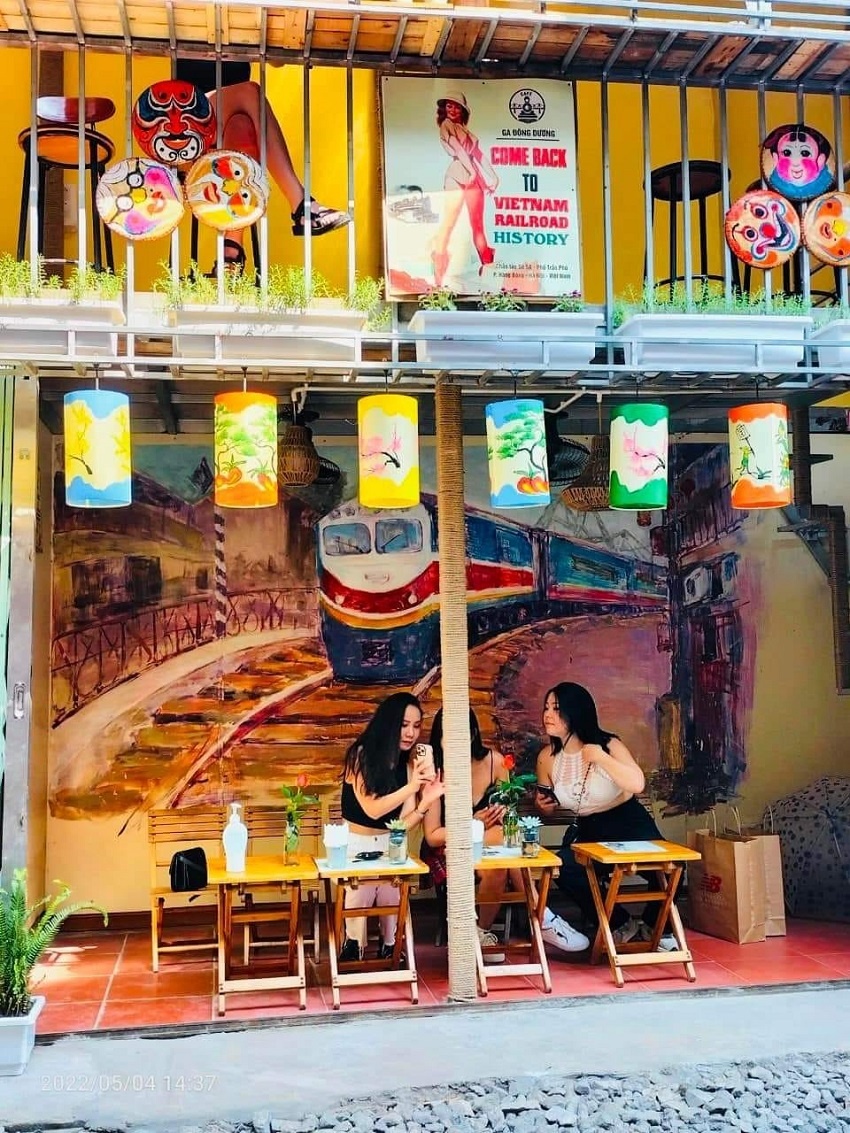 Nestled in a noisy street and not easily found even by locals, Café Ga Dong Duong or Indochina Station Café is still a must-visit destination for foreign visitors, due to the uniqueness that few coffee shops in Hanoi have.

For a long time, a must-try place to enjoy coffee when traveling around Hanoi has been recommended among foreign tourists. That’s Café Ga Dong Duong at the famous “Hanoi Train Street” at the intersection of Phung Hung and Tran Phu Streets in Hoan Kiem District, Hanoi. What’s so special about the cafe that draws so many visitors?

The famous National Geographic Traveler magazine has shared an interesting experience of the railway cafe neighborhood in Hanoi.

“An evening in Hanoi’s Train Street, sipping on egg coffee… I love trains, and I am so thrilled when one speeds past us.

Afterwards I excitedly talk to the woman who made my drink, and she shrugs. This is just normal for her. The trains, if anything, are quite noisy. Did I want another egg coffee?”

The status posted recently by NatGeo Travel on social media has received nearly 450,000 likes and a lot of comments from users around the world.

The North-South railway in Vietnam was established in 1902 during the French colonial period. At some unknown time, people working in the railway industry started building houses along the line, gradually forming a small neighborhood from Long Bien Station to the end of Le Duan Street. For more than 30 years, many generations have lived in this place; children have been born and grown up with the clickety-clack of the steel wheels on the tracks.

The train track has become a playground for children and even the open-air kitchen of the dwellers of the neighborhood.

Though not being named officially on the administrative map, Hanoi Train Street is marked on every tourist manual. Foreign tourists usually crowd the cafes here. Hanging out with friends, having a coffee sip while watching passersby, and posing for some vintage-styled photos along the tracks are just something popularly done at this unusual tourist place.

The idea for Café Ga Dong Duong came from its owner two years ago, and the shop has undergone four renovations and after each one, more customers come. All the articles inside the shop, from the seats, lights, and utensils to the slogans, were collected from decades-old trains.

So, the space perfectly matches the track outside, creating a distinctive feature for the shop, thanks to the owner’s family background in the railway industry.

On top of the space, the owner’s stories of the industry with nostalgia for an old Hanoi give her shop a soul that no other cafe has. Most of the visitors coming to Café Ga Dong Duong are foreigners because they love to experience thrills like sitting next to the train tracks to savor a cup of coffee.

In the midst of a bustling city with booming construction, a small cafe recreating the old Hanoi fascinates many people.

Watching the trains at night

During the day, customers here prefer sitting by the track for fresh air and the ancient surroundings, while at night the upper floors are more popular for a panoramic view of night trains heading to Hanoi.

Coffee shop owners memorize the train schedule, like 7 pm. to 10 pm. is the time frame for trains arriving from Sapa or Hai Phong to Hanoi. This is also the busiest hour at the shop, as customers enjoy their drinks while waiting for the special moment: the colossal locomotive closing in.

Enticed by the beautiful and impressive antique space of Cafe Ga Dong Duong, visitors also come here for drinks, with varieties such as egg coffee that combines the fine taste of pure coffee and the greasy taste of eggs. A common drink, iced white coffee, is also prepared differently to suit the taste of foreigners and has become well-liked.

For Mark Noland, an Australian traveler in Hanoi, having a cup of coffee next to the track is a thriving experience. “A local friend of mine brings me there to have some drinks while waiting for the train to come,” he recalled.

“He shows me the daily train schedule on the cafeteria’s wall. We have one to pass at 9:00 pm, and just five minutes before that due time, the café’s owner folds all the tables and asks everyone to stand up against the wall for the train to pass. A long train was literally just in about 30cm of our face when it passed! What’s a kind of cool and enjoyable feeling. I will recommend my friends to experience it when visiting Hanoi,” he told The Hanoi Times.

Safety is a priority

However, the fact is that life on the tracks is dangerous, especially when more and more crowds of tourists flocking there for a photo hunt. Therefore, Hanoi Train Street was permanently shut down in 2019 and only some coffee shops are still open until now, the Café Dong Duong is one among them. The owner has just reopened the café in April after two years of hiatus because of the Covid-19 pandemic.

The Hanoi Times wishes to give an important note: those railway cafes actually violate safety regulations, so foreign travelers should take precautions when they visit the place.

For Coffee Lovers: Four Most Popular Trends of Hanoi Café

Administrator - 4 September, 2021 0
Hanoi is a famous destination for tasting the best cafe in Vietnam, and this is the best cafe trends for you to experience and explore once you have a chance to spend your holidays in Vietnam.

Administrator - 2 March, 2021 0
Riding the waves in sunny waters like Nha Trang or Vung Tau will be one of the most exciting activities to experience the Lunar New Year holiday.