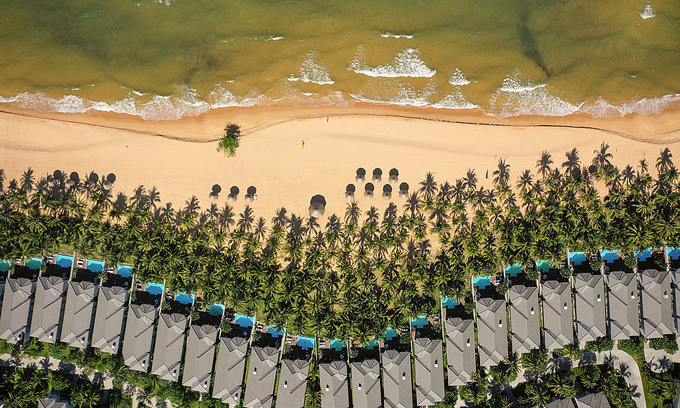 Phu Quoc will not be ready to welcome fully vaccinated foreign tourists next month as planned because the local vaccination rate has been low, a top official says.

Lam Van Thanh, Chairman of Kien Giang Province, where Phu Quoc is located, said that by the end of October, the island would not have ensured necessary conditions to carry out its planned tourism reopening plan.

He said only 35.2 percent of people aged 18 and above have got a first shot and just 6.13 percent of residents have been fully vaccinated.

The island needs another 250,000-300,000 doses to achieve herd immunity, but recent allocation has also been low, while the stipulated time between two doses of a Covid vaccine is 4 to 8 weeks, depending.

Even if the amount of needed vaccine doses was allocated right now, it would take around two months for Phu Quoc to achieve vaccination coverage for 90 percent of its population, Thanh said.

He emphasized: “The province will reopen international tourism when pandemic prevention measures are ensured at highest level. It will not sacrifice the health and lives of people for economic growth.”

Therefore, while local authorities are racing against time to implement the international tourism reopening plan, the exact time it can happen cannot be predicted now, he added.

Bui Quoc Thai, director of Kien Giang’s tourism department, said there would be a rehearsal in October to review procedures on welcoming foreign tourists at the Phu Quoc Airport and escorting them to designated hotels.

With its low vaccination rate, Phu Quoc is grappling with a new Covid cluster in An Thoi Ward that had infected at least 27 people as of Wednesday.

Nguyen Luu Trung, deputy chairman of Kien Giang Province, told at a press meet on Tuesday that authorities have identified the source of transmission and the new cluster would not affect the pilot tourism reopening plan.

The central government had earlier approved plans to allow fully immunized tourists from Europe, the U.S., Northeast Asia, Australia, and the Middle East to visit Phu Quoc, stay at sequestered resorts and visit a limited number of tourism spots during the first phase of the reopening starting October.

Phu Quoc, Vietnam’s largest island, shot up in international popularity after the government rolled out a 30-day visa-free policy for foreigners in 2014.

In 2019, before the onset of the ongoing pandemic, it received over five million visitors, including 541,600 foreigners.

Administrator - 22 August, 2020 0
Hanoi boasts its own uniqueness during each time of the year. As to deciduous season, its charm and sheer beauty inspire countless photo enthusiasts and nature lovers.