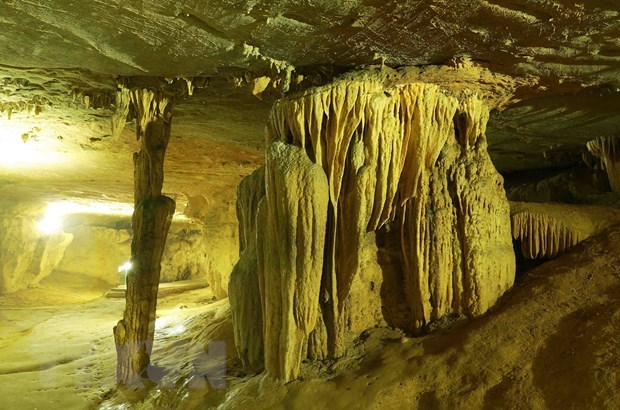 Hanoi (VNA) – Nguom Ngao Cave is located in a mountain in Gun village of Dam Thuy commune, Trung Khanh district, is a priceless asset that the nature has gifted to the northern mountainous province of Cao Bang.

Nearly 5 kilometres away from the renowned Ban Gioc Waterfall, Nguom Ngao Cave was discovered in 1921, opened to tourists in 1996, and recognised as a national-level scenic landscape in 1998.

Nguom Ngao means “Tiger Cave” in the Tay ethnic language. It is said that that this site used to be a den of many tigers which were then killed by local residents to guarantee a safe life. Given this, local Tay people named this place “Nguom Ngao”.

However, another story said there was an underground stream with piles of pebbles flowing into the Quay Son River and releasing murmur which echoes in the cave and sounds like a tiger’s roar, thus earning this cave the name “Nguom Ngao”.

The cave section surveyed by the British Caving Association in 1995 is 2,144 metres long and has three entrances, namely Nguom Ngao, Nguom Lom, and Ban Thuon.

Researchers said this cave is a limestone one containing many coral and crinoid fossils. It used to be part of an ancient sea that existed about 400 million years ago.

According to a 2016 survey by the Vietnam Institute of Geosciences and Mineral Resources, Nguom Ngao is 2,769.6 metres long and features five openings located at altitudes of between 420 and 507 metres.

The cave management board has just opened 945.8 metres and two entrances of Nguom Ngao to visitors.

Once entering the cave, visitors will be amazed at strangely shaped stalactites. Nguom Ngao is home to multiple limestone chambers, floors, stairs, and corridors in various sizes, along with stalactites and stalagmites in diverse shapes such as a coral reef, a ship, a waterfall, an overturned lotus flower, and a terraced field. All give this cave magnificent and fantastic beauty.

Notably, colours of stalactites here are different from those in caves in other localities thanks to the mixture of calcium with many other substances.

The deeper tourists go into Nguom Ngao, the more charming it becomes. Sometimes, they can also see small streams snaking through this cave.

With pristine and breathtaking beauty, Nguom Ngao Cave is truly a masterpiece of nature.

Although Cao Bang authorities have opened just nearly 1 kilometre of the cave to tourists, Nguom Ngao is still a not-to-be-missed destination once coming to the province. From this place, travellers can also visit the nearby overwhelming Ban Gioc Waterfall, another scenic landscape.

Nguom Ngao Cave is part of Non Nuoc Cao Bang, which was recognised as a member of the UNESCO Global Geoparks Network in 2018.

Non Nuoc Cao Bang is about 300 kilometres from Hanoi. Covering over 3,000 sq.km, the geopark is home to fossils, ocean sediment, volcanic rocks, minerals and karst landscapes, which can give researchers insight into the 500 million years of the earth’s history.

The park is well known for its rich biodiversity and many indigenous species of fauna and flora. Apart from Nguom Ngao Cave, it is also home to other famous destinations such as Ban Gioc Waterfall, Thang Hen Lake, and Phia Oac ecological site.

This is the second UNESCO-recognised global geopark in Vietnam after Dong Van Karst Plateau in the northernmost province of Ha Giang, which received the honour in 2010./.

Administrator - 18 March, 2020 0
NDO – The Ho Chi Minh City Department of Tourism launched a programme on stimulating tourism in December and 2019, promising to bring fresh experiences for visitors travelling to the city.

The year-round magical beauty of Fansipan

Administrator - 29 November, 2020 0
Fansipan (Sapa) conquers visitors’ hearts not only by its unique culture but also by its year-round magical beauty.