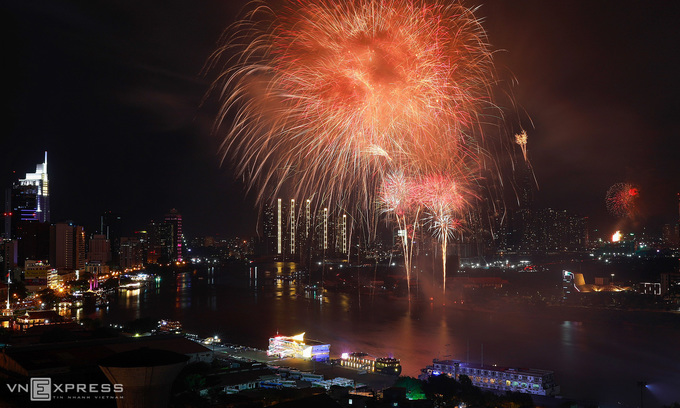 HCMC is busy preparing lighting displays, firework shows and the flower street to brighten up the atmosphere for Tet.

A unique floating flower market on the Binh Dong Wharf in District 8 will feature dozens of boats filled with flowers and plants from the Mekong Delta provinces from January 27 until the afternoon of February 11.

Vietnamese traditionally display vividly red and yellow flower pots in front of their homes to signify their wishes for a lucky and prosperous year, thus fertilizing the “lucky Tet tree” business.

One of the most popular features of Tet (Lunar New Year) celebrations in HCMC is the transformation of Nguyen Hue – a popular pedestrian street – into a floral bonanza. This year’s flower street will open to tourists starting 7:00 p.m. February 9 until 9:00 p.m. February 15.

A total of 26 buffalo mascots styled with traditional materials including rattan, bamboo, maleleuca bark and lotus leaves will be featured on the flower street to celebrate the Year of the Buffalo.

A book street at the intersection of Mac Dinh Chi, Nguyen Hue and Ngo Duc Ke streets will open at the same time as the flower street.

Tet is the biggest and most important festival in Vietnam. It is a time when millions of migrant workers return to their homes in the countryside from major cities to mark the coming of the Lunar New Year with loved ones. The Lunar New Year is also celebrated by several other Asian communities around the world.

Administrator - 6 March, 2021 0
VEDANA restaurant is the only architecture in Vietnam to win the Grand Prize of the 11th international YUANYE Awards.

Why you should take a sleeper train in Vietnam

Administrator - 23 August, 2020 0
Vietnam is vibrant with green rolling hills, bustling cities, and rich foods. Locals are kind, everything is cheap, the scenery is breathtaking, and the weather is ideal. Many spend months in Vietnam, and still can’t see or do everything on their bucket list. Don’t let this deter you if you only have a week, because there is a solution….taking a sleeper train in Vietnam!