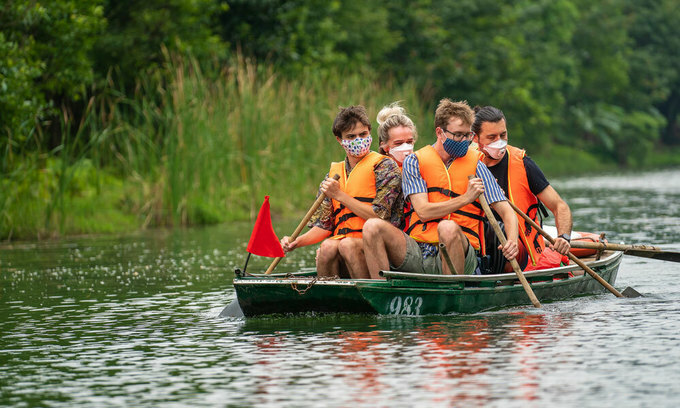 Foreigners row a boat near Mua Cave (Hang Mua) in the northern province of Ninh Binh, in March 2020. Photo by Shutterstock/OlegD.

Vietnam received 2.72 million Asians in the first half of the year, down 58.4 percent from a year ago, according to the General Statistics Office (GSO). They accounted for over 72 percent of total foreign arrivals.

Tourist arrivals from China and South Korea, Vietnam’s biggest feeder markets, dropped by 63 percent to 919,000 and 60.4 percent to 823,000, respectively, as Vietnam suspended all international flights to the two Asian countries since February.

The country has suspended all international flights since March 25 and banned entry of foreign nationals since March 22 except for special cases.

Luong Hoai Nam, member of the Tourism Advisory Board (TAB), told VnExpress that it was hard to reopen doors to foreign tourists at this time as a second wave of Covid-19 has broken out in Asia.

“If negotiations with countries in Northeast Asia, Southeast Asia and Oceania are conducted soon, the reopening of some international routes in the next three months is feasible. However, European and North American markets will require a longer wait because the Covid-19 situation there is still very complicated,” he added.

At a government meeting in Hanoi last week, Prime Minister Nguyen Xuan Phuc stated that Vietnam was not yet ready to open up to international tourists given the lack of improvement in the global situation and the second wave of infections suffered by several countries including China and South Korea.

Vietnam has gone 74 days without community transmission of the novel coronavirus. It has recorded 355 infections without any deaths. With five patients confirmed to have recovered on Monday, the country now has 20 active cases.

The virus has claimed over 490,000 lives in 212 countries and territories.

A closer look at the kitchen serving quarantined people in Hanoi

Administrator - 21 March, 2020
0
Despite being under quarantine at a military school belonging to the Hanoi Capital High Command in Son Tay town on the outskirts of the capital, people in isolation are still ensured a balanced diet with plenty of nutrition.

Administrator - 25 May, 2020
0
The Hanoitimes - Tourism venues in Hanoi shut down amid the Covid-19 outbreak.

Administrator - 10 May, 2020
0
Medic Nguyen Vi Anh was initially recruited into the U.S. Navy after a courageous stint in boot camp.

Administrator - 2 May, 2020
0
Only 3.7 million foreign tourists visited Vietnam in the first four months of 2020 due to the COVID-19 pandemic, a year-on-year decline of 37.8 percent, according to the General Statistics Office (GSO).

Insider story: I’m back home from Asia and shocked at U.S. coronavirus response

Administrator - 1 April, 2020
0
My family barely fled Vietnam last week before all international flights were grounded. Instead of feeling relief when we landed back in the United States, I was alarmed to see a lack of safety precautions or serious concern about the COVID-19 crisis in comparison to Asia. I am gravely concerned about America’s ability to avert a health and economic catastrophe.

Administrator - 18 March, 2020
0
NDO - Tourist attractions nationwide were crowded with domestic and foreign visitors during the holiday of the 44th anniversary of Southern Liberation and National Reunification Day (April 30) and the 133rd anniversary of May Day (May 1).

Administrator - 18 March, 2020
0
Mua Caves in Hoa Lu, has recently become a popular place for foreign travelers in Vietnam, surpassing Trang An and Tam Coc to top TripAdvisor’s 2018 list of destinations in Ninh Binh.