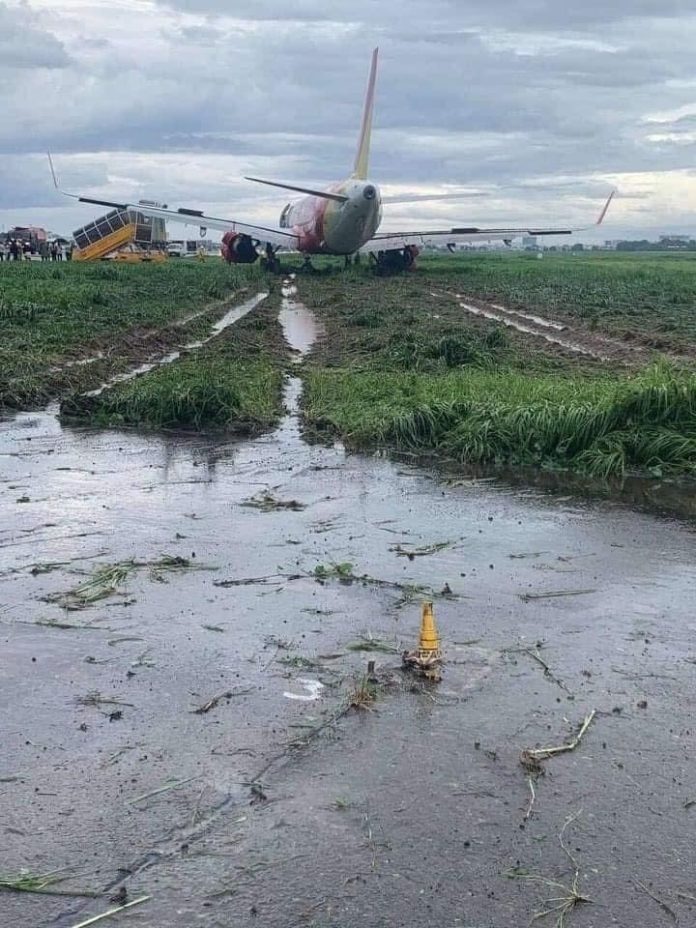 The Civil Aviation Administration of Vietnam (CAAV) announced this without disclosing their names or nationalities.

It also set up an inspection team to investigate the incident, decode the black box of the Airbus A321neo aircraft and analyze the flight data.

The six flight attendants on the trip have also been suspended, though it is not clear why.

Flight VJ322, which had arrived from Phu Quoc Island with 217 passengers, landed at around noon at the Tan Son Nhat International Airport and skidded off the runway into a grass field.

Fortunately, no one was injured, but the accident affected dozens of other flights since the runway is the only operative one currently in operation with the other being closed for upgrades.

The low-cost airline blamed the heavy rain and strong winds for the accident.

“The Vietjet aircraft landed, moved a short distance before skidding off the runway,” Thang said.

With Storm Nuri forming over the East Sea early on Saturday, heavy rains and strong winds have lashed many parts of southern Vietnam, including HCMC, during the weekend.

The airport shut down for six hours, affecting nearly 190 Vietnam Airlines, Jetstar Pacific and Bamboo Airways flights, which were delayed or had to be diverted at other airports.

Administrator - 18 March, 2020
0
NDO – In the early days of spring, Hanoi features a romantic beauty, when the yellow and red colours of the leaves are dyed brilliantly in a familiar corner. The rows of Bang lang (Giant Crape-myrtle) tree, Loc vung (Barringtonia acutangula) trees are changing the colour. In the background of the blue sky, each of the yellow leaves, the red leaves, sway lightly in the wind.

Administrator - 28 April, 2020
0
Forty-five years after the country’s reunification, Ho Chi Minh City has transformed from a war-damaged city into a major economic hub in the country and Southeast Asia. With a population of around 13 million, the city aims to become a smart and modern urban area.

Administrator - 18 March, 2020
0
The huge columns of wind power turbines of the Bac Lieu Wind Power Plant, which is the largest key project of wind power in the country, are situated in a vast alluvial area in Vinh Trach Dong Commune of Bac Lieu City, Bac Lieu Province. They show the endless potential of wind power resources in the Cuu Long River Delta.

Administrator - 18 March, 2020
0
Even if you have never been to Vietnam, you have most probably heard of their fabled ‘beer hoi’ bars: home brewed drinking dens where grandmas pump out jugs of pale, watery lager for as little as $0.15 US, but usually around 50 cents per glass in Ho Chi Minh. The culture of sitting on plastic chairs that spill out of a local bar onto the pavement, drinking, chatting and eating local barbecued snacks, has been a popular experience for tourists in Hanoi for several years but there are also several beer hoi bars in Ho Chi Minh so foreigners can experience this unique nightlife activity without venturing to Vietnam’s capital. At around 3%, this beer is low in strength, and far more watery than a typical beer, and it is brewed fresh every morning. Beer hoi bars are some of the friendliest establishments and on any one night you could speak to backpackers, businessmen, con artists, army veterans and plenty of inquisitive locals. Here are the places to find beer hoi bars in Ho Chi Minh City:

Japan mulls easing entry ban on Vietnam and 3 other countries

Administrator - 15 June, 2020
0
Japan is considering easing the entry ban on Vietnam, Australia, Thailand, and New Zealand in the first relaxation of travel restrictions that were imposed due to the spread of the new coronavirus, government sources said.

Administrator - 18 March, 2020
0
Eco-tours that guarantee full immersion in the agricultural lifestyle of rural Vietnam have attracted more visitors to Trang An tourist site in the northern province of Ninh Binh.