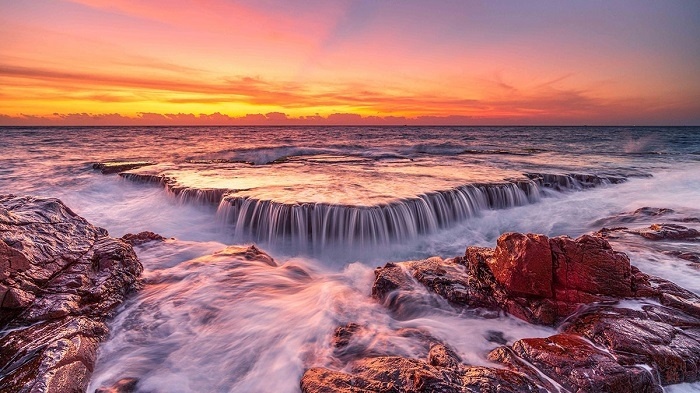 According to locals, the name ‘Hang Rai’ comes from the fact that this place had housed many species of otters.

Because of special geology, Hang Rai has a large and flat limestone surface that has been eroded by waves and seawater. The ancient coral reefs have grown into a large area like a giant stone slab with its surface jagged with sharp-edged rocks and holes like on the surfaces of Mars or the Moon.

The best time to visit the ancient coral reefs is from March to September when it is dry and sunny.

The surface of the ancient coral reefs is jagged with sharp-edged rocks and holes like on the surfaces of Mars or the Moon. (Photo: VNA)

At low tide when the seawater overflows on the rock surfaces and then recedes to form a unique waterfall in the sea. What is more interesting is that the colour of the waterfall changes every day due to the sun and sea level of the day.

The seawater is left in small holes on the rock and is exposed to the harsh sunlight of Ninh Thuan and then evaporates and becomes salt.

The site’s management board has planned to restrict visitors from stepping directly on the coral surface to protect the corals from the effects of human activities.

Administrator - 29 June, 2022 0
NDO/VNS - Nha Trang is not just well known for its beautiful beaches and natural landscapes, but also many tasty dishes such as ‘xoi’ (steamed sticky rice) with braised anchovies, locally referred to as ‘xoi ca com’.

Administrator - 3 October, 2020 0
Keo temple, which dates back to some 400 years ago, has long been deemed the invaluable treasure in Thai Binh. The temple is a household name of generations of Vietnamese pagoda goers across the country.