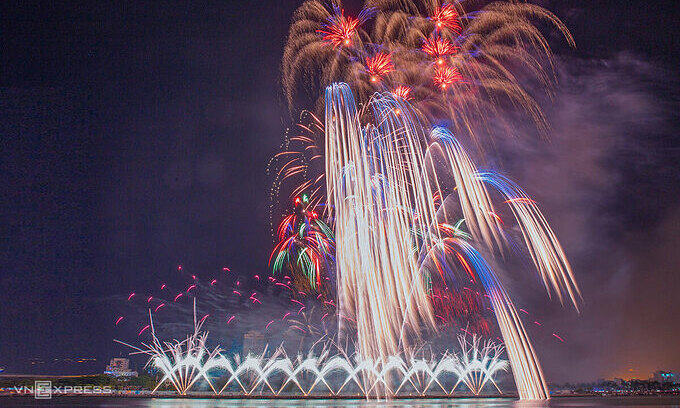 Fireworks light up over Da Nang during the Da Nang International Fireworks Festival in June 2019. Photo by VnExpress/Nguyen Dong.

The Da Nang International Fireworks Festival has been canceled for a second year in a row as Covid-19 rages in neighboring countries and threatens a possible return to Vietnam.

Le Trung Chinh, Chairman of the city People’s Committee, said on Monday that Prime Minister Pham Minh Chinh had called for a stop to crowded festivals amid the high risk of a fresh Covid outbreak as the pandemic is worsening in neighboring countries.

Cambodia, Laos and Thailand have been struggling with a surge in community transmissions linked to new variants.

One of Vietnam’s biggest tourism events, the fireworks festival in Da Nang attracts pyrotechnic teams from Belgium, Brazil, China, Italy, Russia, the Netherlands, and other countries and thousands of spectators every year. In 2017 what used to be a two-day competition became a month-long festival.

Da Nang, a top tourist attraction in central Vietnam and a neighbor of ancient town Hoi An, is famous for its long, sandy beaches like My Khe.

Administrator - 27 September, 2020 0
In this season, the weather in Huong Hoa upland district is often cold and foggy in the early morning, creating a blurry yet mesmerizing scene.

Administrator - 21 March, 2020 0
The A1 Hill in the northwestern province of Dien Bien, is the site of the famous victory against the French colonists in the battle of Dien Bien Phu and is one of the most popular historical sites, attracting both local people and tourists.