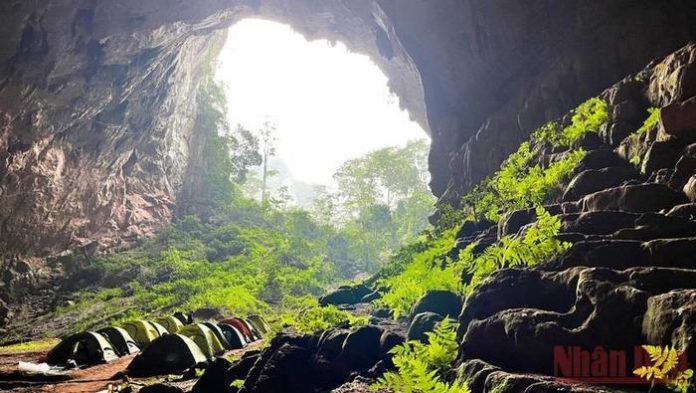 According to AFAR, it’s easier than ever to dive deep into the gigantic caves of this UNESCO World Heritage site. Phong Nha–Ke Bang National Park, a geologically notable site in central Vietnam, has tempted daredevils since 2013, when Son Doong, the biggest cave on the planet (large enough to hold a Boeing 747), opened for multiday tours.

The magazine also cited that on the new Hang Ba tour (still in development), the guides will lead spelunkers through upwards of five caves with gigantic limestone chambers and dangling stalactites. When cavers aren’t crawling, swimming, or paddleboarding, they’ll be camping and trekking through jungles.

The AFAR magazine quoted expert Howard Limbert, who led the expedition team that discovered the caves in the early 1990s, as saying he has wanted to design this tour for ages. Back when first discovered, it took 15 hours to reach the cave cluster from Phong Nha Village. Thanks to a new road, it only takes around five to six hours.

Imbert also said collective efforts to protect the caves (his team has mapped more than 500 in Vietnam) and hire people from the community have reduced the rate of illegal logging and instilled conservationist attitudes.

Phong Nha-Ke Bang can serve as a model for other protected areas in Vietnam, including the newly recognised biosphere reserves in Nui Chua and Kon Ha Nung, according to Limbert.

Cua Lo Tourism Festival kicks off in Nghe An Province

Administrator - 26 May, 2021 0
Hanoi is home to some of the world's most stunning rooftop venues.

Largest statue of Christ in Vietnam

Administrator - 18 March, 2020 0
Visitors to Vung Tau should see the largest statue of Christ in Vietnam. The statue standing with outstretched arms overlooking the ocean is an ideal destination to view the whole of beautiful Vung Tau.