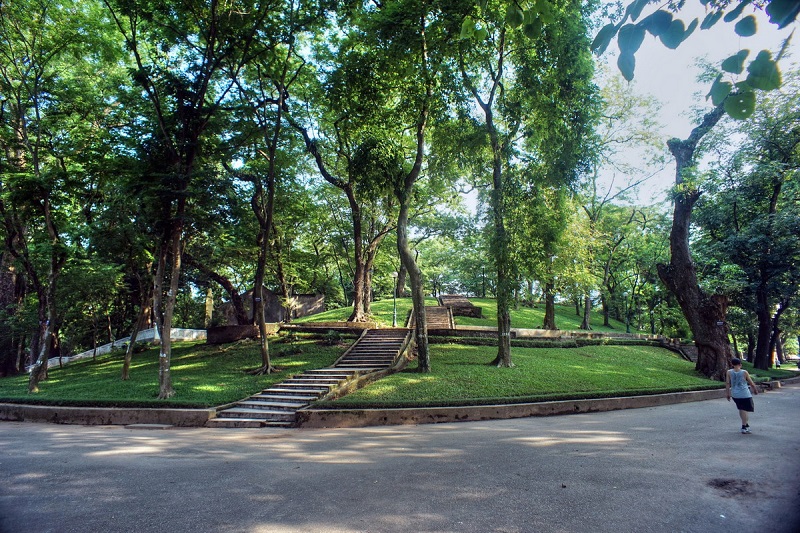 From the historical witness…

Travelers can get into this lush green ‘mini forest within Hanoi’ by two entrances, an extra gate at the beginning of Hoang Hoa Tham street, and the main gate in the middle of Ngoc Ha street.

As the old books recorded, the spacious park was used to be located in the area of Khan Xuan ward, Thang Long imperial citadel – present-day Hanoi.

In 1890, the French colonial government seized the land to build a botanical garden to plant trees, raise animals and name it an herb garden, but old people seemed familiar with the names of “the Flower Farm” or the “Zoo Garden”.

Due to the harsh time of the Second World War (1939-1945), most of the animals at the zoo couldn’t survive without cares. Then, the French colonialists moved the rest of the animals to the Saigon Zoo, and let the trees grow wildly in the premises of Bach Thao botanical garden.

After the capital’s liberation day on October 10, 1954, the revolutionary government renovated and renamed it Bach Thao Park. In the northwest corner of the park there is a high mound where  many trees were planted here, so it was called Nung mount. On the top of the mountain, there is an old temple worshiping Huyen Thien Hac De, a youth who helped the Ly dynasty  fight against the foreign invader.

Nowadays, Hanoi Botanical Garden has long become a popular spot for Hanoians to escape the bustling atmosphere of the city.

Bach Thao Park or Hanoi Botanical Garden means “hundreds of plants” and like its name, the park is one of the few green areas in the increasingly industrialized city of Hanoi housing a rich variety of flora.

Located in the northwest of Hanoi, in Ngoc Ha ward, Ba Dinh district, the park was established by the French more than 100 years ago. Initially, the garden had an area of ​​over 33 hectares, surrounded a number of French palaces and villas.

Beside indigenous plants, many exotic tropical floras from all over the world were brought here and made up a rainforest at the heart of the city. The French also grew large grass lawn, built up a hill by a natural lake, and cages for birds and other animals along wandering shady paths to embellish the scenery.

Many years later, Bach Thao Park was narrowed to make room for construction of the historical complex of Ba Dinh Square. Birds and animals were taken to Thu Le Zoo (Hanoi), Sai Gon Zoo and Botanical Garden (Ho Chi Minh City). Now, the botanical garden with an area of over 10 hectares, is the favorite place for numerous Hanoians.

Currently, the park is the place where nature lovers are immersed in the greenery of the forest, with ancient trees that witnessed many events in the history of the capital.

Hanoi Botanical Garden is home to numerous species of trees that are typical for tropical rainforest, such as coconut, palm, orchid, or banyan tree, among others. Two thirds of them are indigenous plants, and many of them were imported from other tropical regions including Africa, America and Oceania. Some old big trees take two or three people to hug around.

With a cool green space, diversified vegetation, local people and visitors to Hanoi come to the park to find a fresh space, purifying the noisy life. Some foreign visitors to the park said that it is really nice to be away from the crazy traffic and noise, and enjoy the peaceful air inside this garden. There are some beautiful sculptures next to the main entrance, lakes with working fountain in the middle as well as giant trees that they have the opportunity to take photos.

In normal days, a lot of local people come here for morning or late afternoon exercise, playing chess in leisure time or just relaxing after a hard workday. Tourists can visit the park to know more about the locals’ lifestyle and enjoy the peace with them.

Administrator - 17 January, 2021 0
Nguyen Van Bang is among many who came to Hanoi some years ago to earn a living as xe om (motorbike taxi) drivers and provide for their loved ones back home.

What to Do in Ha Long Bay

Administrator - 20 March, 2020 0
This unique UNESCO World Heritage Site is a popular place for tourists but it is good to know that large parts of Ha Long Bay are officially protected from development. The islands vary greatly in size and shape as well as structure. Visitors should allow a few days to explore this magical bay as its attractions are extremely numerous.

The Vuong residence palace, a must visit destination in Ha Giang