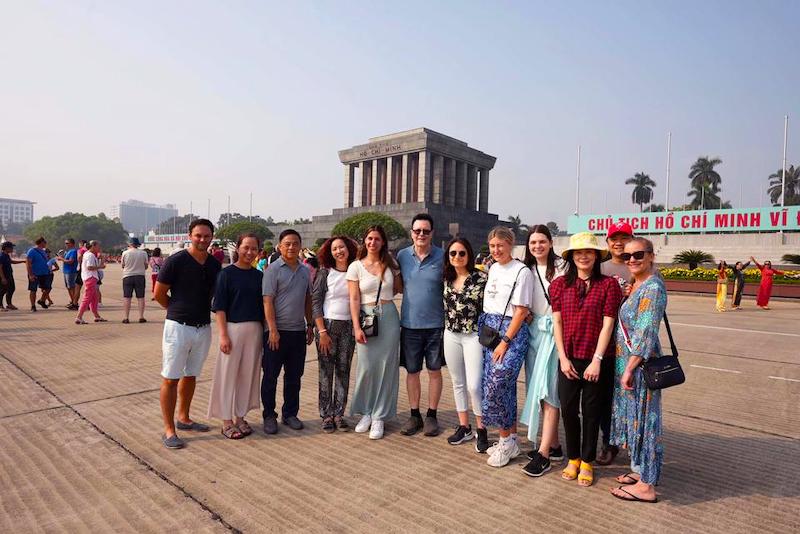 Hanoi has become the most exciting destination for Australian travel agents during a seven-day fam trip that ended on November 13 under the support of the national flag carrier Vietnam Airlines.

Among three destinations, including the northern provinces of Quang Ninh and Ninh Binh, the 12-travel agent delegation selected Hanoi for their most prolonged stay with a visit to different places, namely Ho Chi Minh Mausoleum, the Old Quater, Temple of Literature, Bat Trang pottery village, Ha Thai lacquerware craft village, among other.

This is the first international fam trip hosted by the Hanoi Department of Tourism after the Covid-19 pandemic to promote inbound tourism.

The Australian travel companies said they had interesting experiences when taking a fam trip to the localities with a memorable impression of Hanoi. During the journey to the capital city, they also enjoyed double-decker bus tours, traditional cuisine, street food, shows of “The Quintessence of Tonkin” real scene, and a Thang Long water puppet show.

The municipal Department of Tourism hopes that the visit of Australian tourism enterprises will boost cooperation between the city’s and Australia’s businesses and open up new tourism opportunities once Hanoi becomes an attractive destination for Australian visitors in the coming times.

In 2023, the department will continue to host more fam trips and press trips from other potential markets and support tours to attract international tourists to Vietnam.

In the first ten months of 2022, the number of domestic and international arrivals to the city was estimated at 15.38 million.

As the peak season for inbound tourists falls from September this year to April next year, the city is expected to fulfill the city’s annual targets set for 2022 to welcome about 1-1.2 million international visitors.

The municipal Tourism Department plans to organize new tourist programs and cultural and leisure events to attract more tourists to Hanoi between now and the end of the year.

Earlier, a September-released report from the Australian Bureau of Statistics (ABS) showed that Vietnam had been named among the top 10 most popular destinations for Australians traveling overseas.

The number of Australians traveling to Vietnam has surged significantly after Australia and Vietnam reopened their borders, the report noted.