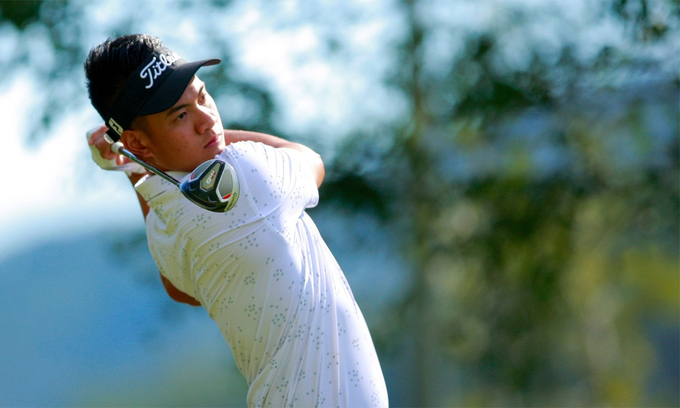 The 22-year-old golfer won VPG Tour Dalat Championship with a result of +6. Quan passed the first round on 76 strokes and the remaining two on 73 each, setting an 18-hole record for the tournament.

This is Quan’s second VPG Tour title after going professional in October. His first was VPG Tour FLC Ha Long Championship on November 6 with a result of +3.

He scored four bogeys on the first day, four bogeys with three birdies the next day, three birdies and two bogeys, and a double bogey on the closing day. Throughout the tournament, Quan scored most of his bogeys in the par-4 hole.

The difference between Quan and South Korean runner-up Kim Gwang-tae was seven strokes. Tae is the only foreign player in the top five and the oldest golfer at the tournament (34).

According to the rules, only the top 15 golfers (amateur excluded) can receive a bonus, of which the champion gets 30 percent of the total prize, second place gets 15 percent, third 10 percent, fourth 8 percent, and fifth 6.4 percent. Organizers Vietnam Golf Association (VGA) said golfers would receive the prize money within a week after the tournament.

VPG Tour Dalat Championship took place from November 20 to 22 with 30 participants on a par-72 course of 7,000 yards with an average stimp rating of 9.5.

Iraq calls off friendly with Vietnam over coronavirus fears

Administrator - 18 March, 2020 0
With Iraq pulling out, Vietnam are looking for a new team for its preparatory friendly ahead of next month’s World Cup qualification match.

Administrator - 18 March, 2020 0
As the World Cup qualifier match against Malaysia looms, national coach Park Hang-seo is grappling with a dearth of time and human resources.