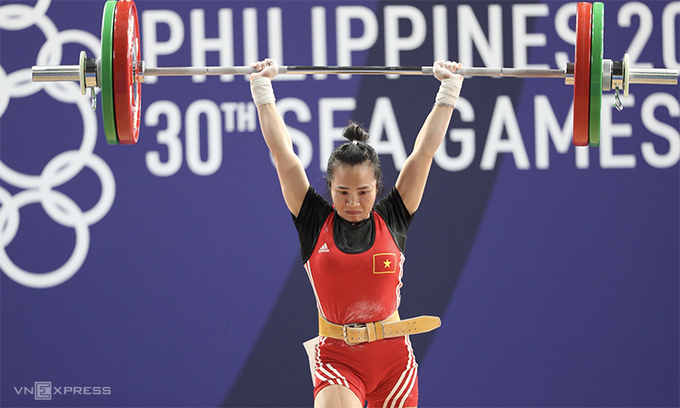 Trinh Van Vinh and Nguyen Thi Phuong Thanh had been caught using performance-enhancing drugs in 2018 and banned for four years.

The national weightlifting team is currently training at National Sports Training Centers in Hanoi and Saigon after the Tokyo 2020 Olympics qualifiers were postponed due to the Covid-19 outbreak.

The IWF said competitions would restart in the next few months without mentioning an exact time frame.

Do Dinh Khang, deputy director of the elite sports department at the National Sports Administration, said that weightlifters are targeting tickets for the Tokyo Olympics, which has been postponed by a year to July 2021.

The team has high hopes for Tuan in the men’s 61 kg, and Duyen and Huyen in women’s 59 kg and 49 kg weight classes.

Weightlifting is a high-risk sport for doping, and around 312 top contestants have their both blood and urine randomly tested before tournaments, according to the IWF.

It recently banned Thai weightlifters from the 2021 SEA Games in Vietnam after many were caught doping at last year’s games in the Philippines.

Administrator - 1 July, 2020 0
Iraq have invited Vietnam to play a friendly match ahead of the 2022 FIFA World Cup qualifiers in the latter’s soil, but might be subject to a 14-day quarantine as per the Southeast Asian country’s current regulations on prevention and control the novel coronavirus disease (COVID-19).

Administrator - 23 September, 2020 0
One direct qualification for AFC Champions League and two for AFC Cup will be awarded to Vietnamese clubs starting next year.