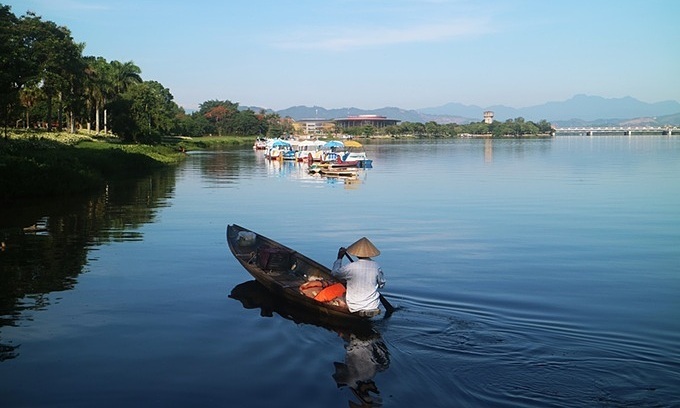 The Huong River, one of the destinations on the course of VnExpress Marathon Hue 2020. Photo by VnExpress/Thi Quan.

Tickets for all four categories of VnExpress Marathon Hue will drop 15 percent from July 30 to August 6.

Hoang Tran, 28, from the nearby Da Nang, received the 15 percent discount when registering for the 5 km distance for her and a group of close friends of five last Sunday.

“Instead of spending $2 million on five tickets, we only paid VND1.7 million, saving up to VND300,000, which we can now use on food and drink,” Tran said.

Hue was the seat of the Nguyen Dynasty from 1802 until the end of feudal Vietnam in 1945. The Imperial City and tombs that dot Hue’s outskirts are the town’s major attractions.

VnExpress Marathon Hue 2020 is organized by VnExpress and Thua Thien Hue Province People’s Committee on September 6, with the desire to open up a healthy playground for sports lovers, especially in the marathon category. The event is expected to attract over 4,000 domestic and foreign athletes.

The run will commence in the middle of fall when the weather in Hue is quite pleasant, not too sunny and suitable for holidaying. Runners will pass by many monuments, tombs and roads along the Huong River, including Thien Mu Pagoda, Phu Van Lau, Truong Tien Bridge and Hue High School for the Gifted.

Take a look at the details of the event here.

AFC U23 Championship: Confident Vietnam feel the heat ahead of UAE...

Administrator - 18 March, 2020 0
Head coach Park Hang-seo believes his players are ready for their first AFC U23 Championship match against UAE on Friday.

Saola might be Vietnam’s mascot for 2021 SEA Games, Para Games

Administrator - 30 September, 2020 0
The General Department of Sports and Physical Training has suggested making the saola the mascot of the 2021 SEA Games and ASEAN Para Games.