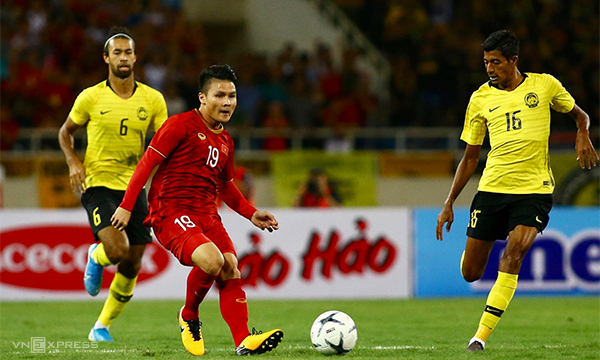 Nguyen Quang Hai (in red) scores the only goal in Vietnam’s 1-0 victory against Malaysia at a World Cup qualification match on October 10, 2019. Photo by VnExpress/Lam Thoa.

The Asian Football Confederation (AFC) has decided to move Vietnam’s 2022 World Cup qualifiers to June this year due to the ongoing Covid-19 outbreaks.

AFC made the decision Wednesday, saying all the remaining games of Vietnam and other teams in group G will take place between June 3-15 at a centralized venue either in UAE or Thailand.

The confederation assured that teams will be given at least 48-hour break between matches and it will announce the host nation in early March.

According to the previous schedule, Vietnam would take on Malaysia on March 30, before playing against Indonesia and the UAE in June.

The Golden Dragons are atop the group with 11 points after three wins and two draws. Following closely behind are Malaysia (nine points), Thailand (eight) and UAE (six), which have played a game less.

Indonesia are already out after losing all five games.

Vietnam need a minimum of seven points from the remaining three matches to advance to the final round of the qualifiers.