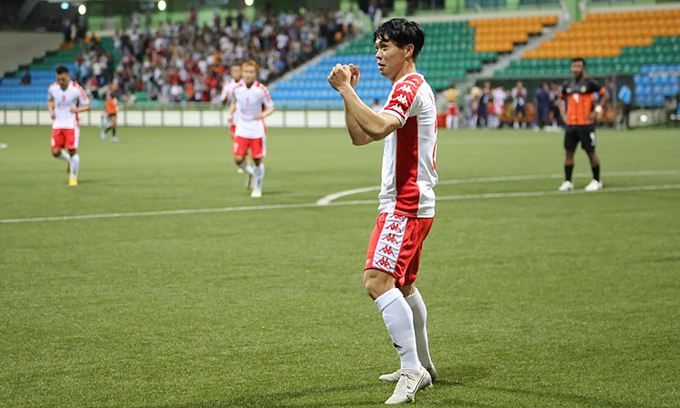 Nguyen Cong Phuong has returned from Belgium and aims to win four titles with his new club, HCMC FC, this season.

He has rejoined HCMC after being on loan and sitting on the bench most of the time in Europe, making a solitary appearance for Sint-Truidense in the Belgian league.

“I was disappointed a bit because I didn’t get to play much in Europe,” he said after HCMC’s 3-2 win against Singaporean club Hougang United on February 25.

Last year was a tough one for Phuong after two unsuccessful loan spells overseas. He went to South Korea to play for Incheon United, a team in the topflight K League 1, but was benched quite often, only getting to play 352 minutes in all during his four months there.

He asked Incheon to end his contract to join Sint-Trudense. But in Belgium he even got less playing time.

In December, HCMC FC bought out the remaining six months of his loan deal with the club.

Back in Vietnam, where he is one of the greatest strikers ever, he scored the first goal for HCMC in their 2-2 draw with Myanmar side Yangon United in the AFC Cup.

In their second match against Hougang United, Phuong opened the scoring and helped the team win and go to the top of group F.

This year HCMC are also set to play in the AFF Club Championship, V. League 1 and National Cup.

“My goal is to win them all with the club,” Phuong said.

His first goal on February 11 was his first in over a year.

“I was very happy after that goal because that is a great way to come back after not scoring for a long time in South Korea and Belgium.”

Phuong might have fallen short of expectations at the club level, but has contributed greatly to the national and U23 teams’ successes.

He helped the latter finish runners-up at the 2018 AFC U23 Championship and the senior team win the AFF Cup the same year.

At the 2019 Asian Cup, where Vietnam reached the quarterfinals, he scored twice.

“My experience in football environments like Japan, South Korea and Belgium is very valuable. I have learned a lot during these times.”

Vietnam’s archaeological treasures to be exhibited in Germany

Administrator - 18 March, 2020
0
NDO—More than 400 of Vietnam’s archaeological treasures will displayed at the LWL Museum in Germany from October 7 to February 26 to celebrate more than 40 years of diplomatic ties between the two countries.

Administrator - 18 March, 2020
0
Budget carrier Vietjet Air on January 12 launched two new air routes linking the Mekong Delta city of Can Tho with Taipei of Taiwan and Seoul of the Republic of Korea (RoK).

Administrator - 20 March, 2020
0
To prevent the novel coronavirus from spreading, many entertainment venues in Vietnam have been closed, activities cancelled, placing artists in abeyance.

Hanoi falls behind many regional cities on foreign tourist attraction

Administrator - 18 March, 2020
0
Hanoi still falls behind many major cities in the region and the world regarding foreign tourist arrivals, according to a survey of the municipal Department of Tourism which was revealed on January 16.

10 Best Things to Do in Nha Trang

ABOUT US
Viet Explorer is all about Vietnam culture & lifestyle.
Contact us: wwwvietexplorercom@gmail.com
FOLLOW US
© Copyright 2020 - https://vietexplorer.com
MORE STORIES

Administrator - 4 April, 2020
0
NDO/VNA – Vietnamese artists in recent years have been investing in web dramas which have attracted tens of millions of views on YouTube.