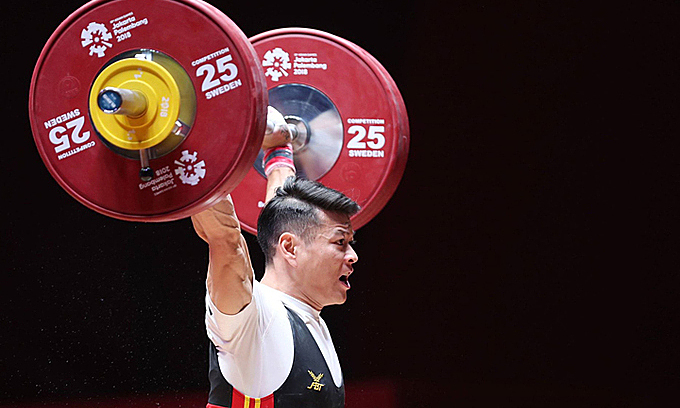 Weightlifting is Vietnam’s biggest Olympic hope this year, with Thach Kim Tuan and Hoang Thi Duyen going all out for medals.

In the past, Vietnamese weightlifting won one silver medal at 2008 Beijing Olympics and one bronze at London 2012, both in the men’s 56 kg category. Tuan had started his career in this weight class. But when the International World Federation removed this class and replaced it with 55 kilograms, Tuan decided to move up to the 61 kg segment.

Tuan qualified for Tokyo Olympics after finishing third in the qualifiers after China’s Li Fabin and Indonesia’s Eko Yuli Irawan. Li holds the world record in the snatch category (145 kilograms) while Irawan holds the clean and jerk category (174 kg) record. Both are heavy contenders for the gold medal. A bronze medal is within Tuan’s reach if he were to maintain his great form.

Tuan’s main competition for the Olympic bronze medal is Japan’s Yoichi Itokazu. At AWC 2021, Itokazu took advantage of Tuan’s mistakes to claim the bronze, with a total of 285 kg lifted.

Tuan will also have to watch out for Georgia’s Shota Mishvelidze. In April 2021, Mishvelidze lifted a total of 290 kilograms to finish second in the European Weightlifting Championship.

Tuan could snatch the bronze should he lift a total of 300 kg or more. He reached the mark before, in SEA Games 29. The 295 kg mark is also considered a safe option for Tuan to claim the medal if other opponents don’t plan any surprises. Before his AWC 2021 failure, Tuan reached the 297 kg mark regularly, but that was before the Covid-19 pandemic.

In the women’s event, Duyen also has a fair chance to claim an Olympic medal. After competing at AWC 2021, Duyen returned to Vietnam and for different reasons, had to stay in quarantine for 42 days. In early June, Duyen finally returned to proper training. Her stamina and form have dropped after a long period in quarantine, so Duyen was rushing to gain it back via a high-intensity schedule. But because of that, her left knee injury of 2017 reoccurred. At the moment, she is still feeling the pain.

“I wish the Olympics could be pushed back a week so I can fully recover,” Duyen lamented.

At AWC 2021, Duyen was the only Vietnamese athlete to clinch two bronze medals by lifting a total of 216 kg. Thanks to that, she earned herself a ticket to Tokyo.

“I’m really happy to compete in the Olympics for the first time with the world’s top athletes. But I’m a bit nervous because I don’t know if I can perform well. I understand people’s expectations. However, due to the difficulties that I have faced recently, I can’t promise anything. I can only give my best,” Duyen said.

In the women’s 59 kilogram event, Kuo Hising-chun from Taiwan is a heavy contender for the gold medal, with a world title and three Olympic appearances. There are also Japan’s Andoh Mikiko and Ecuador’s Escobar Guerrero. Both are on the same level as Duyen. If the 25-year-old can repeat her impressive form at AWC 2021, a bronze or even silver medal is within her reach.

Tuan will compete on July 25 and Duyen on the 27th.

Vietnam can be proud after UAE game: assistant coach