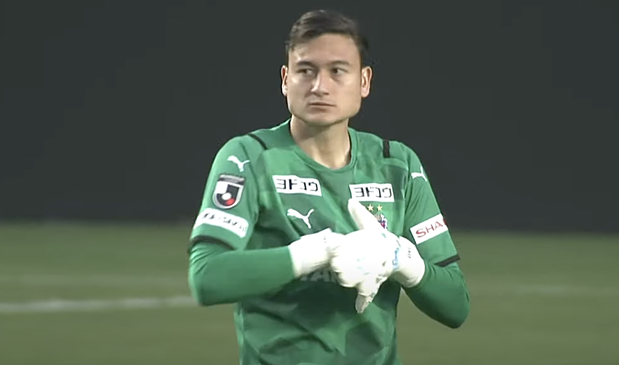 A screenshot of Dang Van Lam in his debut for Japanese club Cerezo Osaka.

In this game, Osaka faced a much weaker opponent that are playing in the third division, Gainare Tottori, and won 2-0. Lam didn’t get busy throughout the game, as he only had to block two harmless shots in the 8th and 9th minute. At the 64th minute, he came out of the goal line to catch the ball before the opponent could take a shot.

The highlights of Lam in this match are not saves but his passing ablility. The 28-year-old didn’t make any long pass. Instead, he made short passes regularly to teammates even when being pressed.

Lam was in Osaka’s line up for the first time this season because the club’s number one keeper Kim Jin-hyeon is playing the World Cup qualifiers for South Korea. The second keeper, Kenya Matsui is said to be infected with Covid-19. Previously, Lam had contact with a Covid-19 case in the club and couldn’t join the Vientam national team for the World Cup qualifiers.

Lam is still waiting for his debut at the top division J1 League where Osaka are playing. The club will compete in AFC Champions League in Thailand from June 24 to July 7.

Before playing in Japan, Lam joined Thai club Muangthong United in 2019 and enjoyed 42 appearances for the club over two seasons. Earlier this year, he agreed to join Osaka and officially signed for the club in April.

Vietnam book historic berth in final qualifying round for 2022 FIFA...

Administrator - 19 June, 2021 0
Vietnam have advanced for the first time in their history to the final qualifying round for the 2022 FIFA World Cup on Qatar despite losing their last group stage game to the UAE on Tuesday.