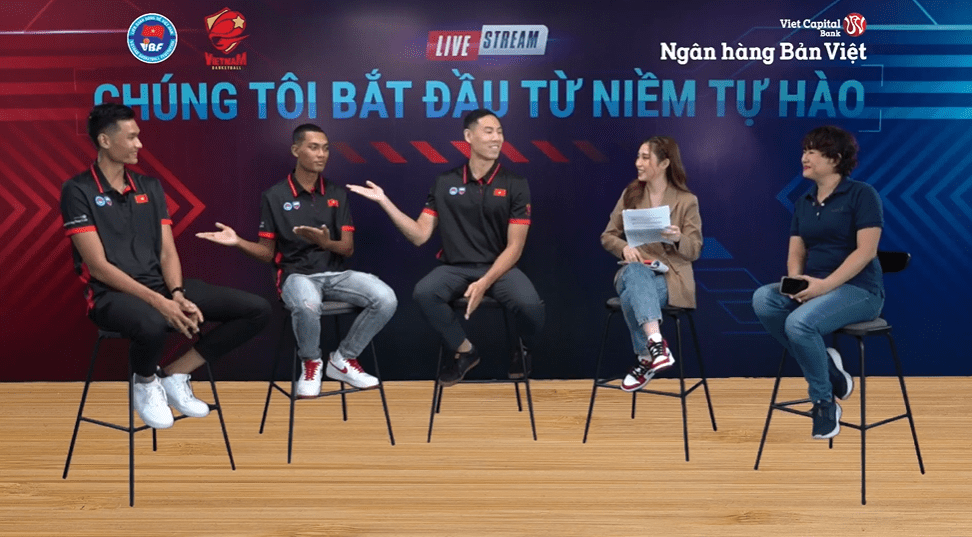 Van Thanh Khanh Linh, a representative of Viet Capital Bank, as well as national team captain Justin Young and members Nguyen Huynh Phu Vinh and Nguyen Anh Kiet were among the guests at the event.

Basketball entered Vietnam in the 1930s, but the sport was not popular back then, Dang Ha Viet, VBF vice-president and secretary-general, said at the beginning of the talk.

It was not until 2016 when Vietnam’s basketball reached a turning point with the birth of the VBA, the country’ first professional basketball tournament.

In 2019, Vietnamese basketball players claimed two bronze medals at the Southeast Asian (SEA) Games for the first time, Viet stated, hoping that the country will achieve much higher results at the 31st SEA Games, which will take place in May.

“The team had yet to have any impressive accomplishments back then, but we strongly believed in Vietnam’s young generation.

“After five years, we are very proud of being a companion of the national team and hope to be able to continue supporting them for years to come.”

At the talk, the national basketball team players shared their thoughts on their participation in the VBA Premier Bubble Games 2021, during which they had to compete without an audience and were isolated from everyone outside of the tournament due to the COVID-19 pandemic.

The players spent their free time playing ping pong, watching movies, and reviewing their games with their peers, as well as calling their family and loved ones.

According to Nguyen Anh Kiet, his biggest disadvantage in the season was the inability to speak English, which gave him quite a hard time to practice the tactics with other members.

Thanks to the support of his teammates, Kiet was able to overcome these challenges as well as the pressure from competing in a professional league for the first time.

Answering a funny question from a fan, Kiet said that Khoa Tran was the most handsome player on the national team.

Meanwhile, Nguyen Huynh Phu Vinh believed that Tam Dinh was the member with the best looks.

Vinh, a player with an impressive height, standing at 2.03 meters tall, said he inherited it from his father.

He admitted it was really difficult for him to spend such a long time away from his girlfriend, but their strong bond was able to help them overcome the long distance.

Captain Justin Young recalled visiting his family and friends in the U.S. after the season concluded.

However, it was not long until he returned to Vietnam to continue with his plans.

Young’s most memorable moment in the league was going head-to-head with his twin brother, Jordan Young, who played for Thang Long Warriors.

Administrator - 1 December, 2020 0
With a large delivery bag on his back Venezuelan Olympic champion fencer Ruben Limardo is out cycling around his adopted hometown in Poland, making ends meet in a strange but heartwarming tale from this time of pandemic.