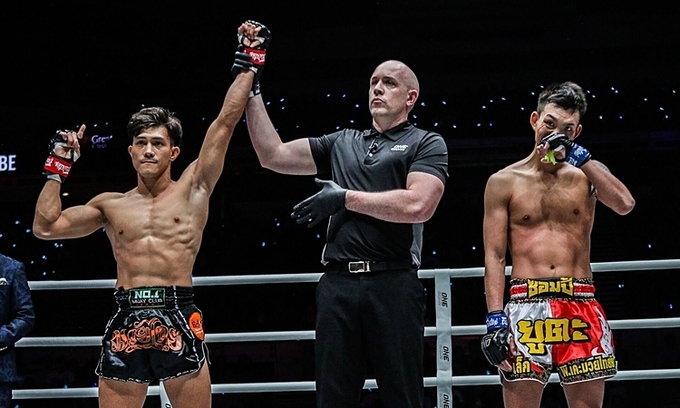 Nguyen Tran Duy Nhat will auction the medal and gloves he won at the famous martial art event ONE Championship for charity.

“I will sell the gloves I used in my first ONE Championship win and the medal I won. Proceeds collected from the medal will be given to the national fund for the poor, while those from the gloves will be sent to struggling coaches and athletes in HCMC’s District 5,” Nhat told media.

The auction is part of a martial art event hosted by Nhat himself, named “No. 1 Muay Club Fight Night.” The competition will take place at the culture center of District 5, where he lives, on August 2, featuring 24 bouts – 10 for amateurs, 10 for semi-pros and four for pro fighters.

“I want to create a playground for Vietnamese fighters, as well as give those eager to learn more about the martial art a closer look,” Nhat said.

Nhat is one of the most decorated and experienced fighters in Vietnam, specializing in Muay Thai and Lethwei (Burmese boxing). He is currently signed to ONE Championship, the number one martial arts media company in Asia and World Lethwei Championship, a promotion firm based in Myanmar.

He is a five-time World Muay Thai Federation champion and four-time SEA Games medalist in Muay Thai. Nhat also won many other Muay Thai international championships and has only lost one match throughout his professional career.

Nhat made his ONE Championship debut on September 6, 2019 in HCMC. It was also ONE’s debut in Vietnam. He faced Azwan Che Wil of Malaysia, whom he knocked out in the third round. On November 22, 2019, he faced Japanese champion Yuta Watanabe at ONE Championship: Edge Of Greatness in Singapore, where he won with a head kick knockout in the second round.

Lyon upset Man City to set up semi with Bayern

Administrator - 14 September, 2020 0
LISBON -- Olympique Lyonnais stunned pre-tournament favourites Manchester City with a 3-1 victory on Saturday to move into the semi-finals of the Champions League where they will face Bayern Munich.

Administrator - 7 September, 2020 0
Filip Nguyen has been called up to the Czech Republic national team for UEFA Nations League, missing the chance to play for Vietnam.