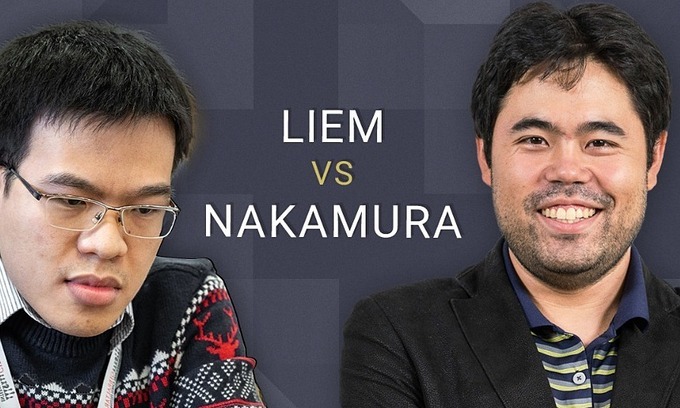 Le Quang Liem (L) is eliminated from the New in Chess Classic quarterfinals after losing to Hikaru Nakamura (R). Photo courtesy of chess24.com.

On the second day of the New in Chess Classic quarterfinals, Le Quang Liem was eliminated after failing to counter a draw.

After being led 1.5-2.5 by American GM Hikaru Nakamura on the first day, Liem had to win at least one match on the second day to take the game to a blitz tie-break. From the onset, Liem played white and stood a great chance to win though time proved unfavorable. Nakamura, realizing the danger, countered Liem’s advance to win the match.

Another loss put Liem in an arduous position, having to win two of the remaining three matches to level the score. However, he could only manage a draw in the next two matches and was eliminated.

“Congrats Hikaru on an exciting and well-played match and good luck in the semifinals. Big thanks to the organizer and everyone involved in New in Chess Classic. I had a great time playing with the best chess players in the world. Will keep following the games tomorrow,” Liem wrote on his Twitter account.

New in Chess Classic is part of Champion Chess Tour, a 10-month long series of 10 online tournaments featuring the world’s top players and with a prize pool of $1.5 million. Games are played on chess24.com and broadcast on streaming site Twitch.

Vietnam U19 head coach among greatest in Asian Cup history

Administrator - 17 July, 2020 0
Philippe Troussier has been selected by Asian Football Federation (AFC) as one of the greatest coaches in Asian Cup history.