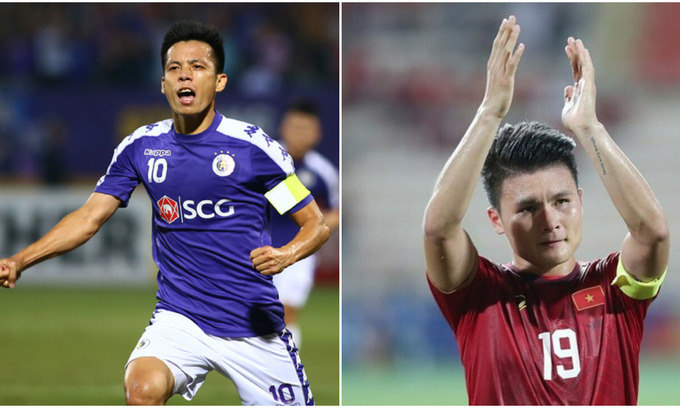 Asian Football Confederation (AFC) recently created a community poll allowing fans to vote for the most beautiful goal in cup history, including the two Hanoi FC players on its list.

In the first round, Quyet’s goal in Hanoi FC’s meeting with Filipino side Ceres Negros that ended 1-1 will go head to head with Bahrain’s Sayed Mohamed Adnan of Al Hidd Sports and Cultural Club that ended 2-0. Both goals were scored during the AFC Cup 2017 group stage.

According to AFC, Quyet showed great improvisation under tough conditions.

With his back to the goal and surrounded by two opposition defenders, he manged to “control the ball with his outstretched right foot before firing a vicious left-footed scissor kick past goalkeeper Roland Muller,” it wrote.

The poll will close at 11 p.m. Thursday with Quyet currently in the lead with 94 percent of votes.

Meanwhile, his teammate Nguyen Quang Hai has already secured a spot among the last 16 memorable goals.

In a concluded poll, Hai was grouped with An Il-bom of 4.25 SC, who helped North Korea defeat Taipei’s Hang Yuan FC 5-1 during the Group 1 stage of 2018 AFC Cup.

It said Hai “left the goalkeeper flat-footed after curling round the wall from 20 yards to tie the score at 1-1” in the match against Turkmenistan’s Altyn Asyr in the 2019 AFC Cup inter-zone semifinal.

Presently, AFC is in the process of shortlisting candidates and has not revealed the specific time for the next voting round.

Quyet, 29, is currently captain of Hanoi FC. Last year was his most successful stint at the club, winning both V. League 1 and National Cup titles.

Hai, 23, played key roles in Vietnam being runners up at the 2018 AFC U23 Championship and winning the 2018 AFF Cup. He won the best free kick goal in AFC Cup history after receiving the most fan votes in June.

Administrator - 27 November, 2020 0
The number of overseas Vietnamese has increased by 800,000 in the past five years, contributing remittances worth over 71 billion USD

Administrator - 27 November, 2020 0
LONDON -- Vietnam’s first Formula One Grand Prix in Hanor, cancelled this year due to the COVID-19 pandemic, will not be held in 2021 either due to local issues, the BBC and sources reported on Monday.

Administrator - 7 July, 2020 0
The top official in charge of the Dalat Ultra Trail 2020 has admitted to not devising a reasonable plan for the trail marathon amid heavy rain which saw a 40-year-old male athlete swept away by floodwaters to his death in the Central Highlands province of Lam Dong last weekend.