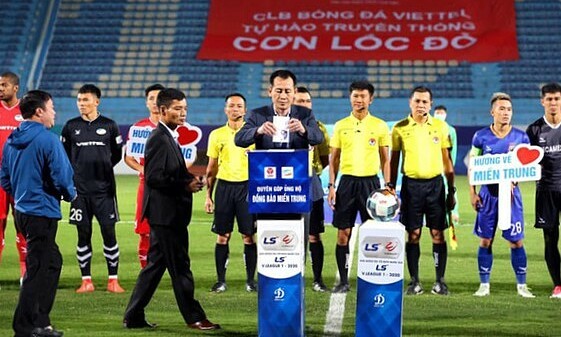 The organizers of the V. League 1 game between Viettel FC and Becamex Binh Duong put money in the donation box to show support for central Vietnam on October 19, 2020. Photo courtesy of Viettel FC.

Domestic football players and clubs are donating money to aid those affected by historic flooding in central Vietnam.

Before the V. League 1 fixture from October 18 to 21, Vietnam Football Joint Stock Company, the players and clubs have commenced a donation campaign for central Vietnam, where locals are fighting historic flood levels.

Donations were made before the third fixture of V. League 1’s second phase and V. League 2 matches, set for October 18 to 21. All donated funds will be sent to Vietnamese Fatherland Front for distribution.

Previously, forward Nguyen Van Toan of Hoang Anh Gia Lai donated VND50 million ($2,154) to central Vietnam. He said the money came from his own business. Star striker of HCMC FC Nguyen Cong Phuong also donated all the money he received for being V. League 1’s player of the month in July and September, which was VND10 million.

“Central Vietnam has encountered many disasters, with life there becoming more and more challenging. Our support and sympathy are now needed more than ever,” Duc wrote via Facebook.

Coach Park Hang-seo of the men’s national team has also donated to the cause.

On Tuesday, Vietnam Football Federation (VFF) revealed it had received VND200 million from staff to aid people in the disaster zone. VFF said during the past few days, it and other league organizers launched several campaigns to support flood victims in central Vietnam.

Young Vietnamese tennis champ serves up storm at US tournament